Welcome to the world of Datacore, FalconStor, Nexenta

Springpath has emerged from stealth with a silo-melding storage data platform, offering a remedy which includes an annual subscription pricing scheme. Is it perhaps seemingly hoping to move in on a market that has too many (and too costly) separate storage silos?

Following a $34m funding round, Springpath was founded in May 2012 as Storvisor, by two VMware vets: Mallik Mahalingam, CEO and CTO, and Krishna Yadappanavar, who were involved with VXLAN software-defined networking and VMFS, a VMware file system.

SDP (Springpath Data Platform) provides commodity server-based storage, has been beta tested for more than 12 months and went GA in January. The scale-out aspect is described as fine-grained and the SW is optimised for flash.

It can provision storage for virtual machines, obviously, and is said to support a "common server-based infrastructure that feeds data to increasingly transient applications".

The SW can be deployed in a hyper-convergence server/storage/networking scheme "as well as in non-hypervisor environments like containers and physical servers".

We understand it provides elastic scaling, has simple and autonomous management, is enterprise grade and offers cloud economics. A couple of diagrams provide more information: 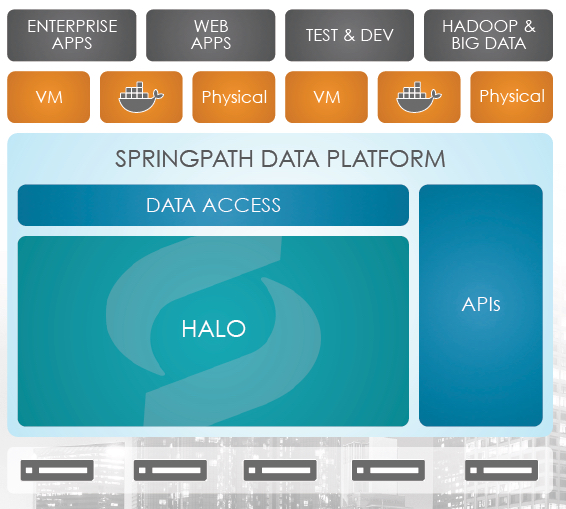 The SDP provides file, block, object and Hadoop storage, the latter via a plug-in. 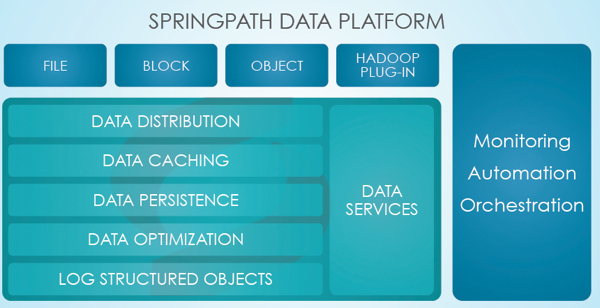 It has, Springpath says, a zero learning curve, and is suited for VDI, test and dev, Microsoft SQL and remote office use cases.

The competitive arena is full to bursting, with every other SW-defined storage vendor, particularly SW-only ones, including Datacore, FalconStor and Nexenta, and hyper-converged vendors such as Nutanix, Maxta and Simplivity, plus the stampeding EVO:RAIL herd. There is a massive amount of background noise that Springpath will have to overcome to stand out.

Get a datasheet here to find out more.

Springpath software s distributed by Tech Data which can ship servers preloaded with the SDP software. End user pricing is as low as $4,000/server/year with servers from Cisco, Dell, HP and Supermicro supported. ®