Researchers from Australia and China have turned up an unfeasibly large black hole that almost dates back to the beginning of time.

At 12 billion times the Sun's mass, and in a quasar that was a million billion times as energetic as the Sun, it's not actually the largest black hole ever spotted. However, its redshift indicates that it's a black hole from very early in the universe.

That's the problematic part, according to Dr Fuyan Bian from the ANU's Research School of Astronomy and Astrophysics, who in a press release said: “Forming such a large black hole so quickly is hard to interpret with current theories”.

At a redshift of greater than 6.30, the quasar, designated SDSSJ010013.021280225.8 (SDSS J0100+2802 in short) is one of only around 40 with that redshift, indicating that they formed in a much younger universe. This particular quasar formed when the universe was less than a billion years old, the researchers say.

Its huge size and age means it must have “gained enormous mass in a short period of time”, Dr Bian said. However, as we currently understand black hole formation, this quasar shouldn't have had enough time to get so big.

Other black holes of similar size have been found, the researcher's letter to Nature states, but those were in “local giant elliptical galaxies and low-redshift quasars”. 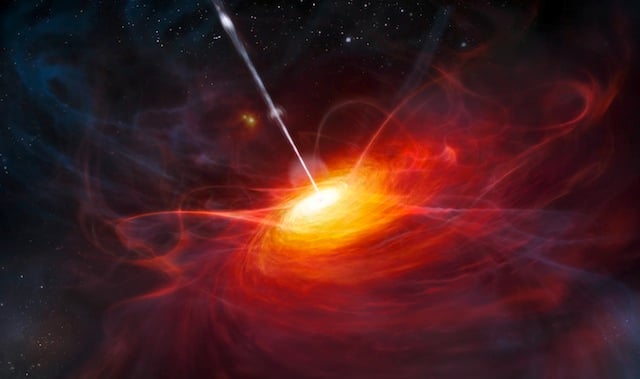 As material makes its descent into the black hole, it gets hot and emits an “extraordinary amount of light” (this particular quasar falls into the “superluminous” category). That light generates radiation pressure that should have limited the black hole's rate of growth.

This quasar is around four times as luminous as SDSS J1148+5251, previously the most luminous quasar in the high-redshift class.

The team was led by Xue-Bing Wu from Peking University. They picked out this quasar from the 500-million-strong Sloan Digital Sky Survey because of its amount of redshift.

While the theorists go looking for explanations of how J0100+2802 got so big so quickly, astronomers are looking to other surveys such as Skymapper to locate more such objects.

As the paper notes, how many such objects exist “would set strong constraints on the early growth of supermassive black holes”. ®