Definitely not a killer feature

The signs of future suicide often pop up on social media, so Facebook has partnered with the University of Washington (UW) to roll out new tools that can hopefully provide a lifeline to those in need.

"Often, friends and family who are the observers in this situation don't know what to do," said Holly Hetherington, a Facebook content strategist working on the project.

"They're concerned, but they're worried about saying the wrong thing or somehow making it worse. Socially, mental illness and thoughts about suicide are just not something we talk about."

Over the next few weeks Facebook users will therefore gain a new option for using the Report Post button on their news feeds. If it looks like someone's having a dark time, friends can activate the button and a trained third-party operator will review the post's content.

The button opens up a new menu system, offering the concerned user the option of either contacting the poster directly, messaging friends for support, or accessing materials designed to help people approach those who may be on the edge. 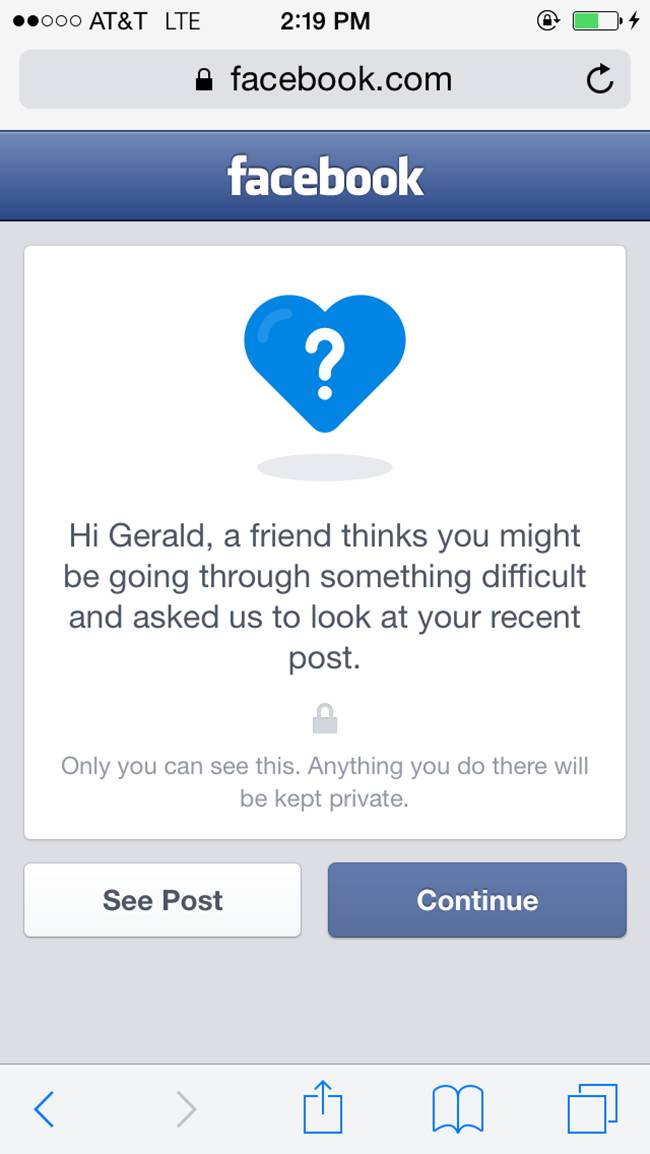 An alert can also be sent out to the person who posted the original message that displays when they next log on, pointing out that people are concerned about them. The recipient can contact a free suicide support line, local advice groups, and watch videos about how to deal with depression.

All of the advice offered by Facebook has been vetted by a series of academic experts and suicide prevention workers, many of whom had made attempts on their own lives and now work to help others.

"From the design side for the suicide prevention experience it was really important to understand that people in these situations are in a lot of distress," said Andrew Li, Facebook product designer on the project.

The tools, announced today at the fifth annual Compassion Research Day at Facebook's headquarters in Menlo Park, will be rolled out across all news feeds in the coming weeks. UW and Facebook are already investigating how to improve them further.

"In the world of suicide prevention, we know that being connected is a protective factor," said Edwina Uehara, dean of the UW School of Social Work. "People are on Facebook 24/7, so there's an opportunity to actually connect a suicidal person with someone they have a relationship with. Facebook is extremely proactive in what they're trying to do. "

Given the stakes, even stopping one premature death is a significant win in the campaign to bring the black dog to heel. Keeping people alive and using Facebook is good for the bottom line, too. ®