Turning social media against Samsung, a Facebook group has been set up to get the Korean company to fix a firmware update that borks the 850 Pro SSD.

This SSD uses brand new 3D NAND and has a 10-year warranty.

According to the Facebook group (requires log-in): "A few days ago Samsung published a new firmware update for its flagship Solid State Hard-drives, through its webpage and its official program Samsung Magician. After a reboot, the drive is rendered unrecognisable and impossible to boot into."

There are several forums also reporting firmware difficulties with this drive:

Disgruntled users have set up the Facebook group – headlined "Top 5 Ways To Kill Your SSD" – to popularise the issue and exert social media pressure on Samsung to get its firmware-fix act up to speed.

The group has 162 members, who want their drives to get corrected firmware so they can get them working and regain access to their now-unreadable data.

Thinking dearly of Samsung I hit the update button and soon it displayed an error message saying it could not finish the update. When I wanted to restart my computer the drive was unable to boot, and is rendered unrecognisable.

BIOS can not even display its name with usual letters, and instead uses several lines of strange symbols and numbers.

When I try to boot with Windows disk, it looks like its loading in a DOS-like surface, but when it tries to boot into the Windows install UI only the mouse cursor is visible everything is black and nothing happens. 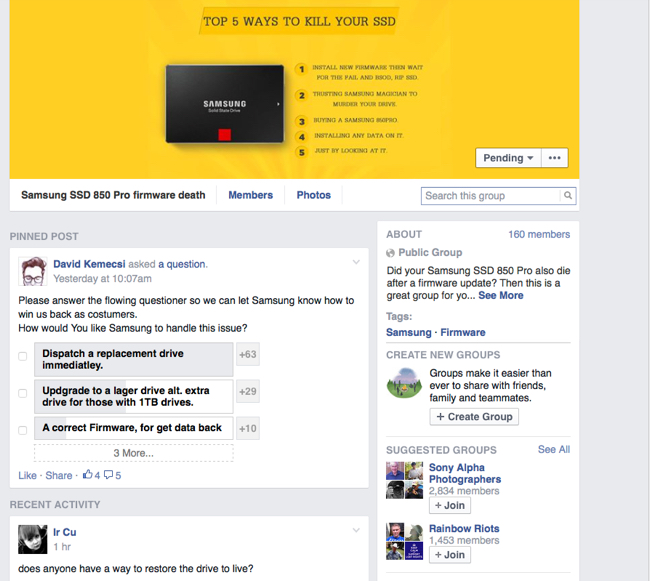 Just got off the phone with a Samsung representative, the FW update from yesterday that I downloaded through Magician is in fact something that is causing problems to a lot of customers.

I have been told that it is sending the reports and information to its division in Korea in order to fix the problem (with no timetable). However, in the meantime they can only RMA the SSD. Sad times.

RMAing the drive means all your data is lost. So much for data safety on non-volatile drives.

Affected user Jayne Samuel-Walker told us that Samsung was informed of the firmware fault on 19 February, but didn't withdraw the firmware until 24 February, meaning many, many other users' drives were infected with the problem.

Samsung already has 840 EVO SSD slowdown issues as well as having its Smart TVs become dumb when Internet access fails.

Samsung sent us this statement:

SSD 850 PROs experiencing the problem may be exchanged or provided technical support through our customer service centres.

We regret to have caused the inconvenience and will continue our commitment in providing the best user experience to our customers.

Somehow we don't think this will satisfy the Facebook group members. ®