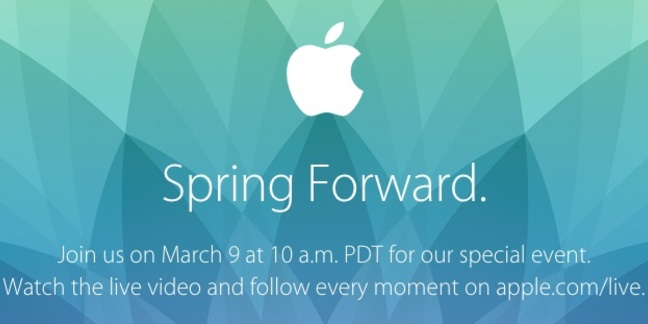 Apple's hype machine has creaked into life again, with media outlets on Cupertino's “nice” list* reportedly showered with a new invitation to pay homage to the company on March 9th. The company's also updated its live events page with news of a to-be-streamed event on the same day.

It's widely held the event will reveal more details of the Apple Watch. But of course nobody knows just what Cupertino will reveal on the stage of San Francisco's Yerba Buena Centre for the Arts.

Recent Apple rumours suggest it is making a car, or could buy Tesla, or might be about to send the price of gold through the roof by buying lots of it to make watches.

All that Apple's saying is that a “special event” is in prospect. Which hasn't stopped a metric kazillion pieces of nerdgasm speculation hitting the world's blogs.

If Apple's true to form we'll be treated to an announcement about full features of the Watch, plus prices and availability dates. Sales in Apple stores will kick off about a fortnight after the announcement. Customer complaints about minor flaws will kick off about 48 hours after that. Vulture South predicts discolorations of the watches caused by sweat, plus lousy battery life. After a week or so narky reviews will point out the timepieces' software isn't perfect and beautiful. About a month later we'll hear about people being mugged for their Apple Watches. By then the world will move on to hype about the iPhone 7 and ColossoPad for business.

* Apple doesn't do PR in El Reg's direction, on the basis of ancient grudges about our predilection for colourful language and not being gushy about everything it does.