Page File El Reg bookworm Mark Diston leafs his way through three forthcoming releases. Remains of the Day author Kazuo Ishiguro's first book in a decade takes us on a mythical journey. Jon Ronson engages in a journey of his own having been victim of a social networking stunt. And Joseph Connolly entertains with his tale of guilty pleasures and domestic obsessions.

So You've Been Publicly Shamed

Jon Ronson is an author and documentary maker. His latest book is about the modern phenomenon of public shaming, mostly via social media, although also taking in other aspects such as the tabloids and courtroom cross-examinations.

The book opens when the author discovers a fake Twitter account in his name and he decides to confront his identity hijackers face-to-face.

They turn out to be “academics” – although pretty stupid ones – who are shamed into retiring the fake Jon Ronson due to the adverse public reaction when a film of their meeting is posted on YouTube.

This event inspires the author to consider public shaming as a whole and seems to be the catalyst which led to the writing of this book.

Ronson sets out to meet individuals who have suffered this ignominy and allow them to tell their stories. He begins with an American academic who was caught out plagiarising his earlier work and that of others by an astute freelancer. This is followed by the tale of a rich white girl who makes a bad joke about poor black people. The resulting backlash results in both losing lucrative jobs and status.

“I hate not knowing what’s on Twitter,” confesses Ronson as he meets a series of individuals whose trivial detritus left on social media sites blows up in their faces in the form of public outrage, chastisement and the loss of careers and families. 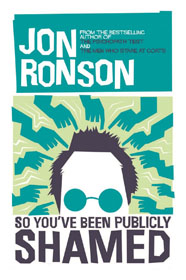 A couple of detours follow, as Ronson meets a Texas judge who prescribes public humiliation as punishment and we’re treated to a quick potted history of the rather shady history of Group Madness, as described by the likes of Gustave Lebon – a 19th century doctor whose views belong firmly in that era – and Philip Zimbardo, who ran the notorious Stanford Prison experiment. Both appear to be downright charlatans, though a number of their spurious ideas have become accepted by many.

One of the most perceptive of Ronson’s interviewees is Mercedes, a member of 4chan, responsible for some of the most aggressive public shaming campaigns. The perpetrators?: “A lot of them are bored, understimulated, overpersecuted, powerless kids… on the internet we have powers where we would otherwise be powerless.”

The author then meets Max Mosley who was exposed in the News of the World as an S&M enthusiast. He refused to be humiliated, took the paper to court and won, garnering a lot of public sympathy in the process – though Ronson does point out that there is a lot of gender inequality when it comes to similar cases involving women.

The conclusion is taken up by a company who manipulate Google: reputations.com, who have refused business with paedos. Ronson asks their names and gets slapped down for "the prurient curiosity of the type you condemn in your book”.

Jon Ronson’s great strength as a writer is his empathy with his subject, which seems to bring about trust and openness from his interviewees. Like all journalists, he is a voyeur, but he is sensitive with his material and self-analytical enough to realise his own part in the phenomenon. So You’ve Been Publicly Shamed is an interesting commentary on human behaviour and its consequences.