Joseph Connolly is a bibliophile, journalist and the author of many works, both fiction and non-fiction. Style is his thirteenth novel and is the tale of three characters in pursuit of their own idea of style and its destructive consequences.

Terence is what you might call a connoisseur: Scandi furnishings, Havana cigars and a decorative Luger. He is married to Amy, the pushy mother from hell who will do anything to see her son, Alexander, graduate from boy model to Hollywood. Amy’s protégé is Dolly, whose style is more akin to Hello! and who would do anything for a diamond-encrusted Rolex. 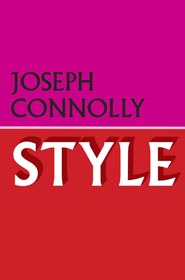 Terence is a brilliantly drawn character and he envisages Amy’s ambitions for his son to become “the latest freak in the increasingly grotesque freakshow that the entire world has now become”.

We get a hilarious history of Terence’s love life. How he married Amy, but how his soulmate is KT: “Eames, she said is a god… either you know this to be true or else you are one of them. The outsiders, the flounderers, the stooges, the civilians, all the blind buffoons…”

This is a parable of a very modern phenomenon, but it is reminiscent of the style of Amis père – the men seem incorrigible rogues, the women are a tad two-dimensional. And yet, Joseph Connolly gets under the skin of his characters and presents their interior monologues in a convincing and entertaining manner – even Dolly, who is an update of the Pygmalion/My Fair Lady tradition: “Dolce & Gabbana, they got this new perfume for babies. Ahhh… reckon that's ever so sweet.”

Connolly gets away with a lot of stereotyping through the love and attention he bestows on his characters as their obsessions threaten to destroy them: “She had me really, at the mention of my Saarinen table. Her sincere appreciation. It was only then that I really began to see her.”

Terence states their raison d’être to his mistress: “What other two people have you ever met in the whole of your life KT, who have so much... style...?” His wife loses it: “The madness of Amy’s gaze can wither a dazzle of flowers… cause masonry to tumble” and Dolly goes to extremes because, in her own words, “I want style more than anything else in the whole bleeding world”.

The styleless are treated with disdain. A neighbour is regarded as “possessing the lithe and antelope grace of a grand piano: A buffalo wearing a frock… and brutal when roused”.

All the characters eventually get their comeuppance and – in the manner of the species – don’t seem to learn a great deal from their experience. The moral of Style is that “there are other things in life apart from style”.

Joseph Connolly is a class act. Designer living and the cult of celebrity has never been more of an oversubscribed subject, yet his own breezy, ironic style breathes life into a rather familiar story. Style really isn’t my usual style, but Joseph Connolly kept me entertained throughout. It incorporates the best of the books Kingsley used to write and which Martin can’t quite seem to manage.