[Warning, there may be spoilers ahead – ed.] 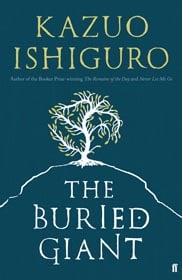 Kazuo Ishiguro is a novelist who has twice been a Booker Prize winner. The Buried Giant is his eighth novel, a fantasy based on Olde English myth, which takes place after the battle of Mount Badon, the last of King Arthur’s struggles against the Saxons.

The story focuses on the journey of an old couple, Axl and Beatrice, who are travelling to visit their son. Ishiguro has a good handle on the English species: “The people who lived nearby – one wonders what desperation led them to settle in such gloomy spots.”

The locals are beset with memory loss, which is explained by some as a mist which afflicts those who have been “forgotten by God”, though it turns out that it is caused by female dragon breath. Cue the appearance of an heroic dragon slayer, a strange boy and a rather old and quixotic Sir Gawain on loan from the Round Table.

The tale reveals some pagan/Christian rivalry:

"Is your Christian god one to be bribed so easily with self-inflicted pain and a few prayers?"

"Our god is a god of mercy… whom you, a pagan may find hard to comprehend."

What you don’t get from Kazuo Ishiguro is the usual angle in this type of story. He is not a Celtic nationalist with lists of unpronounceable names for every character and place and he is not an academic nutcase with a dubious re-reading of Gildas or The Venerable Bede. In short, he doesn’t break the golden rules of good fantasy writing of keeping the story straightforward and the language simple. That said, there is a bit of Shakespearean grandstanding towards the anti-climax.

Kazuo Ishiguro seems to have intended to write a historical fantasy for adults, but is ultimately a little too clever and labyrinthine for his own good. The denouement of this story never really happens, the dragon virtually falls on the hero’s sword. A Saxon versus Brit showdown is similarly undramatic.

No significant memories return after the dragon’s demise and we leave Axl and Beatrice taking a ferry ride, having still not met their son... or is this some clumsy metaphor for the afterlife? I really can’t tell. As for the buried giant, if you were assuming that he plays a significant part in this story, you’d be wrong.

But the main problem with this novel is that it goes nowhere fast: the couple’s erased memories seem barely worth recalling and the mysterious boy’s destiny is never explained. This is a book of too much filler and not enough action, a fantasy tainted by too much reality.

Kazuo Ishiguro’s approach to the genre is unusual, it has to be said. By downplaying the action, the fantasy element has to be imaginative, but it is tacked on as if an afterthought, leaving little more than a stylish dark ages soap opera. There is little romance and next to no sorcery, meaning the end result of this book is to render the magical mundane. ®