A built-in battery? Is your name Apple?

MWC 2015 The grandeur of today's Samsung S6 phabgasm in Barcelona reminded your correspondent of the scene in The Hitchhiker's Guide to the Galaxy when the day dawned for the announcement of the Answer (to life the universe and everything).

Think pop concert, complete with glowing wristbands, dramatic music with drums and a stage the size of Coventry. The hype grew. Then Samsung marketing wonk Younghee Lee told us that we were going to see something which was “entirely new”, an “incredible journey”, and “the most significant team effort in the company’s history”.

So, when the firm's supremo JK Shin revealed a rectangular slab, it was all a bit, well, 42.

Samsung unveiled two versions of the phone on Sunday: The S6 and the S6 Edge. The Edge slab, like the Galaxy Note 4 Edge before it, carries the screen around the bevel of the phone. But – whereas the Note only does this on one side – the S6 Edge does it on both sides.

The impressive thing is not that Samsung can do this, but that the company can production engineer to allow for the quantities necessary to meet the demand it both expects and needs to power the Samsung machine.

The raptures over design irk a little. There is an option for Dual tone colours to give an impression of depth, a bit like a 1970s' metal-flake custom car and the phone chassis apparently uses metal that is 50 per cent stronger than that used in rival phones.

Lower your expectations from the hype that promised world peace, and you can accept it’s a nice device. Of course, it’s an incremental improvement over the Samsung S5. But while that left everyone feeling “is that it”, the S6 is, on its own terms, genuinely impressive.

The UI tweaks include using the Edge for five favourite contacts. They can each be assigned colours and the Edge will glow in a suitable colour when you get a communication from them. Icons have been replaced with text.

Ironically this is a huge step forward.

For years UI designers have said that icons are something which are equally meaningless in any language, and have always known that text is better. The triumph of designers over marketing is important here. The UI also uses colour coding for types of communication: green is a phone, purple – video, orange – contacts.

The screen makes the phone special, it’s a 5.1-inch 577ppi OLED, and is, as you'd expect, curved at the edges. There is 14nm processor from an unspecified manufacturer, but widely believed to be Samsung microelectronics Exynos.

Samsung mobile claimed it was 35 per cent faster than the 20nm Qualcomm 810 used in the Galaxy Note.

The new phone will disappoint many as the battery is built in. However, there are good engineering reasons for doing this: you can make a phone thinner, the S6 is 6.8m, and more rigid but Samsung claimed that the reason it has chosen to do this was because the new battery has fast charging at 10 minutes for four hours of use. 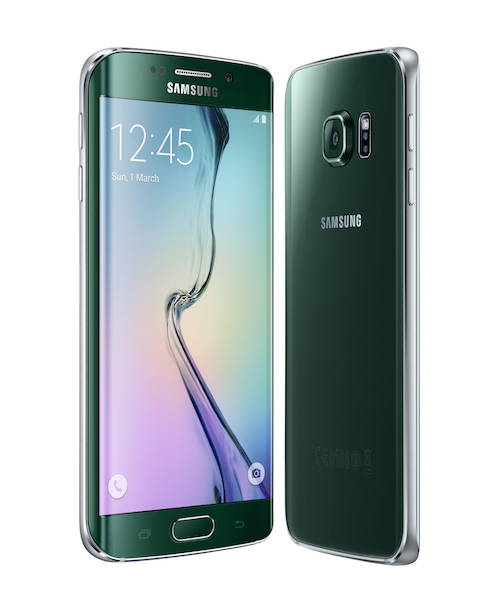 It apparently charges fully in half the time of Apple's iPhone 6 and wireless charging for both the WPC and PMA standards is built in. Keen snappers will notice that, at 16mp, the raw numbers on the camera are not class leading.

Both Nokia and Sony have 20mp cameras but Samsung claimed that less is much better.

The vendor showed both stills and video as side-by-side comparisons with an iPhone 6 and the difference appeared to be dramatic – because Samsung, surely, would not stupidly wave such a claim around in front of 5,000 partners and media if it simply wasn't true, would it?

The front 5-megapixel camera also gets an f1.9 lens. As revealed ahead of MWC, Samsung has included mobile payments with NFC and magnetic induction using the LoopPay MST technology.

This means it will work with mag swipe readers as well as the contactless one – although retailer education may be an issue. The Register will bring you more on this service in a separate piece.

Samsung said it planned to ship the phones to world+dog on 10 April. ®