Hey, you, get into My Cloud

WD has updated its My Cloud NAS products, adding more oomph for prosumers and two boxes for small-business-filing fanatic users.

WD estimates we should expect 3.3TB of data storage in every home by 2016, and NAS is the way we should store files in homes and small businesses.

WD claims its Red drive has the greatest drive share in the NAS market and wants to extend its total addressable market by examining the crossover prosumer/small business point for 2- and 4-bay NAS, where neither its My Cloud Expert nor Sentinel product ranges fit.

The boxes run Linux with WD’s My Cloud SW layered on top. A My Cloud mobile app gives remote access from your smart mobe or tablet, with private cloud functionality.

WD says these boxes are for professional consumers, or prosumers: freelance video photographers and the like who need a lot of centralised file storage with RAID and back-up options, and remote access.

My Cloud SW is pre-installed, integrates with Dropbox, OneDrive and Google Drive, and so combines private and public clouds. 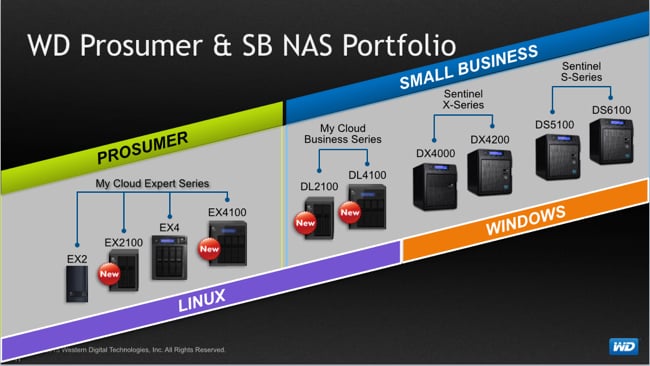 The same 2- and 4-bay drive units are integrated with a dual-core Atom processor with iSCSI, AD support and AES 256-bit encryption to provide a My Cloud Business Series that is positioned below the WD Sentinel X-Series snd S-Series NAS products for small businesses. 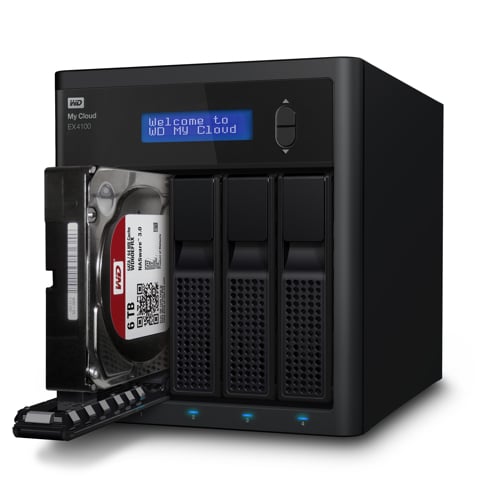 The DL2100 and DL4100 are the two resulting systems and they have My Cloud SW running with the Linux OS. They have the same capacity range as the EX2100 and EX4100.