Is light a wave or a particle? Beaming boffins prove it's BOTH

And they've got the pics to prove it, thanks to clever nanowire tricks

The old conundrum is right: not only is light both a wave and a particle, but Swiss boffins have captured it behaving as both at the same time. 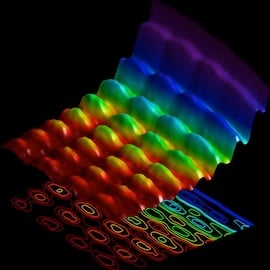 The researchers at the Ecole Polytechnique Federale de Lausanne (EPFL) – pulled the trick by forcing an interaction between electrons and the photons in the standing wave.

First, to get the standing wave, they fired laser pulses at a metallic nanowire; this caused vibrations in the nanowire's charged particles.

The surface of the nanowire became a kind of waveguide, and where waves travelling in opposite directions met, they formed standing waves.

Photons' ability to travel along a wire is well-known among photonics scientists. Professor Ben Eggleton of Sydney University's CUDOS research group explained that photons can be guided along a metallic wire in the form of plasmons (surface plasmon polaritons).

The light is coupled to the electron, and its path will therefore follow the path of the nanowire, professor Eggleton said.)

To get the image of the standing wave, the EPFL researchers fired a stream of electrons from an electron microscope. Where the electrons interacted with the standing wave, it either added quanta of energy to the electrons (speeding them up, as the release says), or took energy away (slowing them down). That change in energy provided the information that let the researchers image the light's wave-like nature.

The same information the light imparted to the electrons also demonstrated its particle aspect.

The electrons' change in speed was, as quantum theory predicts, an exchange of quanta of energy – demonstrating that the “waves” of light on the nanowire were acting as particles and waves at the same time.

Note that while the dual nature of light has been predicted for more than a hundred years, every experiment so far conceived shows either that:

As EPFL's Fabrizio Carbone observes, this is the first direct imaging showing the paradoxical nature of quantum mechanics, and it's of far more than idle interest: “Being able to image and control quantum phenomena at the nanometer scale … opens up a new route towards quantum computing.” ®