One app to rule them all. It hopes

One of the complaints levelled against Windows 8 apps was that their typical chunky appearance resulted in low information density, such as lists that showed only a few rows at a time even on large desktop displays.

The UAP controls are less prone to this effect, though today’s presenters said that the Windows 8 problem was made worse by developers following Microsoft’s templates too closely. The company now suggests that developers take a more relaxed approach, so that the UI is better optimised for each app.

The Adaptive UX is enabled in part by a new XAML layout control called the Relative Panel, which arranges its children by declaring relationships between them.

The Relative Panel lets you define triggers, which are layout changes that fire according to factors specified by the developer, such as when the display width falls below a certain size. You can then control how an app behaves on smaller displays. For example, a panel that is always on view on a large display can become a flyout that is hidden by default. 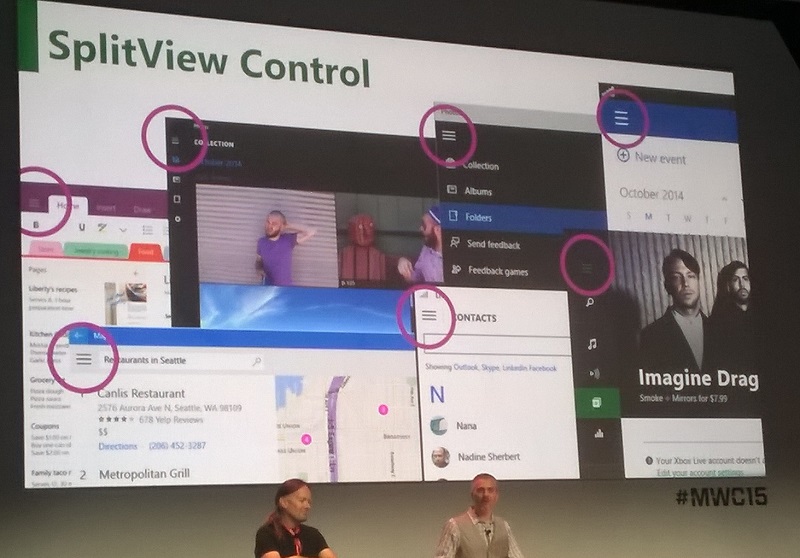 Another new control, called the SplitView, lets you display content in panels that rearrange themselves for different display sizes. The SplitView can be used with the “hamburger” menu familiar to users of the Windows 10 preview, three short lines typically at top left that drop down a menu of options.

A UAP app can optionally be compiled to a single binary that will run on all Windows 10 platforms, including phone, tablet, PC, Xbox One, or even HoloLens, the virtual reality goggles announced in January. If they are .NET apps, they are compiled to native code using the project called .NET Native, avoiding dependence on the installed version of the .NET Framework as well as speeding load time.

The first Windows 10 Universal Apps will be from the company itself, and include a version of Office (Outlook, Word, Excel and PowerPoint), accessories like Calculator and Alarms, the Windows 10 Start menu, and the "Project Spartan" web browser, featuring a new HTML rendering engine.

Microsoft also announced a new web-based app type called a Hosted Web App. These apps are deployed through the Windows Store, but content is served from a web application on the internet. Microsoft describes this as a way of publishing a website to the Store. JavaScript in a Web Hosted App can call a subset of WinRT APIs, subject to the users’s consent, enabling device integration. According to the presentation, this is secure because the interop code is delivered through the Store and is subject to its policies, as well as other security measures.

The company did not share everything about Windows 10 and its apps at Mobile World Congress. Some details are being held back for the Build conference in San Francisco at the end of April.

Is Microsoft on to a winner? Well, on the plus side, the prospect of a unified platform increases the appeal of the Windows platform for developers who can now target both PC and mobile devices with a single code base, though when considered as a mobile platform Windows will remain a small market relative to iOS and Android.

The case against is that it forms yet another change of direction for long-suffering Windows developers, though one built on the Windows 8 foundation of XAML and WinRT. Even Windows 8 Store apps will need work to port, though they will run on Windows 10 using the old-style UI.

The strategy at least seems more carefully thought out than the previous generation, where Windows Phone, Windows "Metro" and Windows desktop all had different developer frameworks. ®