Sick of Chrome vs Firefox? Check out these 3 NEW browsers

Browsers have been making a comeback. There have been three brand new browsers released and even Firefox, which seems to be sliding further into irrelevancy every day, has released a new version aimed at developers and claims to be working on a WebKit-based version for iOS devices.

It’s a refreshing moment. After an initial mushrooming development and branches during the 1990s, Internet Explorer, Firefox and Opera were it for quite some time. Apple produced Safari and much later Google followed up with Chrome. Since Chrome in 2008, the browser market has been more or less been stagnant.

Project Spartan sees Microsoft stripping all the legacy code out of Trident, the rendering engine that powers Internet Explorer, so that Spartan contains only the modern, standards-compliant code. It's not an entirely new browser, but it is indicative of a sea change in Microsoft's view of the web.

Whether Microsoft can shed the legacy code that dogs IE to this day remains to be seen, but don't forget that once upon a time IE was the great innovator of the web. For example, IE gave the world Ajax, the ability to refresh certain parts of the page without reloading the whole thing. Without that contribution, the web as we know it would simply not exist.

Yandex's concept browser, meanwhile, re-imagines the browser as something almost non-existent. So far it's little more than a concept video, but the idea seems to be primarily a conceptual leap: each website becomes more like a standalone application with its own interface than a page loaded into a browser window. Without actual code available, though, it's tough to tell how well this idea will work for most people.

If Yandex's concept browser lies at one end of the spectrum, the third new browser in recent months, this one from Vivaldi, lies at the opposite end. Both are based on the WebKit rendering engine, but where Yandex's concept sees the browser slipping to the background, Vivaldi brings it back to the forefront with a host of extras aimed at the power user.

Vivaldi is in many ways what Opera used to be before Opera moved the WebKit/Blink and became (more or less) a clone of Chrome. Vivaldi is the power user's browser in the same vein as Opera 12.

That's no accident. Vivaldi's CEO is none other than Jon S von Tetzchner, founder and former CEO of Opera. Von Tetzchner's goal for Vivaldi is to rebuild the browser that Opera once was – the power user's browser. For Vivaldi that means features like mouse gestures, keyboard shortcuts, tab stacking, note taking and email – not available yet, but coming.

There are also handy features like the ability to turn off images to speed up page load times over slow networks and a slew of advanced settings that allow you to control everything from the location of tabs to the key combos of most menu items.

If Chrome, Firefox and most especially Yandex are trying to turn the browser into a sleek, minimalist Bugatti for everyone, Vivaldi wants to perfect the humble Volkswagen – infinitely customisable and easy to work on. 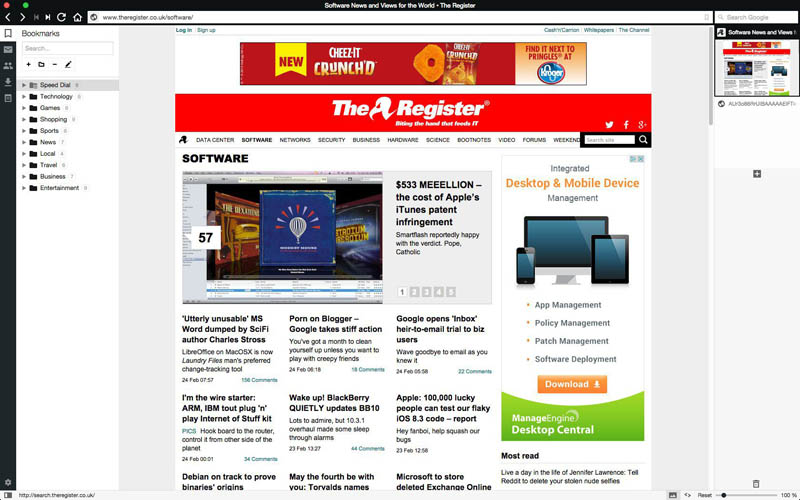 Vivaldi – power to position everything where you want, including tabs

That said, Vivaldi's interface is not unattractive or cluttered, nor is it difficult to use. Most of its features are tucked away out of sight. To get the most out of Vivaldi you need to go digging. If the first thing you do when you install a new app is open up the preferences and see what you can customize then Vivaldi is the browser for you.

Or at least it will be. While Vivaldi is indeed available for download it's labelled a tech preview, which is best thought of in this case as pre-alpha. There's much about Vivaldi that remains unfinished. As noted, the integrated email application – which presumably will be similar to something Opera had offered – is thus far non-existent.

Other missing features include a mobile version and a sync tool for easily moving back and forth between the two. Both of those are in the works, as is support for third-party extensions. In the mean time, though, as the downloads page puts it, Vivaldi is "intended to show the direction of our product. It is not perfect, far from it."

The pre-alpha state of Vivaldi is frustrating because it will remind power users of what a browser can be (arguably once was), but it's just not quite there yet.

Not to be left out of the new browser renaissance, Mozilla recently launched a version of Firefox specifically aimed at web developers. So far, there's not much in the developer edition that's not in the standard edition of Firefox, but expect that to change over time. For now the developer edition does get you the Valence plugin pre-installed, which means you can debug just about any web browser from within Firefox.

As the name implies, the developer edition of Firefox targets web coders rather than end users, but it's not hard to imagine this becoming a refuge for the latter as the main version of Firefox continues to simplify itself, removing more and more options and customisation possibilities.

It's also worth noting that with a dozen or so extensions you can turn Firefox or Chrome into something very closely resembling Vivaldi. But as anyone who does this already can tell you, the number of extensions installed inevitably becomes inversely proportional to the speed of your browser.

Vivaldi's goal is to give you the power of a dozen extensions without the performance hit. It's not quite there yet, but if you're looking for a browser to replace the once great Opera 12, Vivaldi is one to keep an eye on. ®