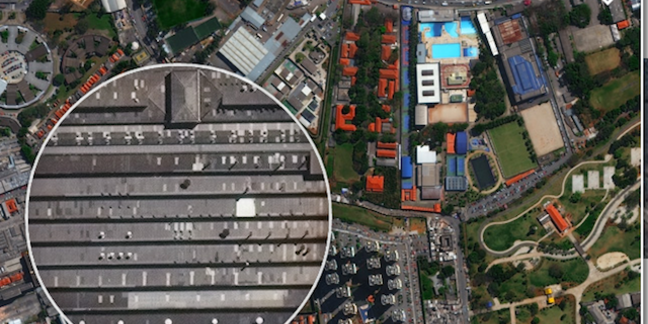 Last March the USA noticed a market disparity: French companies could sell higher-resolution satellite images than American companies. By June of the same year bans on US companies selling sharper space snaps were lifted. And last week the US company agitating for that change, DigitalGlobe, started to sell 30cm-resolution snaps to anyone who wants them.

DigitalGlobe is excited because it reckons that 30cm images were previously only obtainable with aircraft, which can't always fly into places people want photographs. There's no stopping a satellite (at least not without causing a major international incident) and DigitalGlobe's WorldView-3 bird whips around the globe every 97 minutes so gets lots of chances to point one of its lenses at clients' desired locations.

DigitalGlobe's previously said 30cm resolution shots make it easy to spot post-boxes or manhole covers. Let's add the US size 13 (European 47) shoes worn by your big-footed correspondent to validate our headline, shall we, and consider the image at the top of the story as DigitalGlobe says it shows off the difference between 70cm and 30cm snaps.

Privacy? DigitalGlobe's heard of it and thinks that once users put their images to work in good causes nice things will happen. It's already pointing to the United Nations Office for Outer Space Affairs signing up for its imagery as evidence of just how useful it will be for solving terrestrial troubles. ®