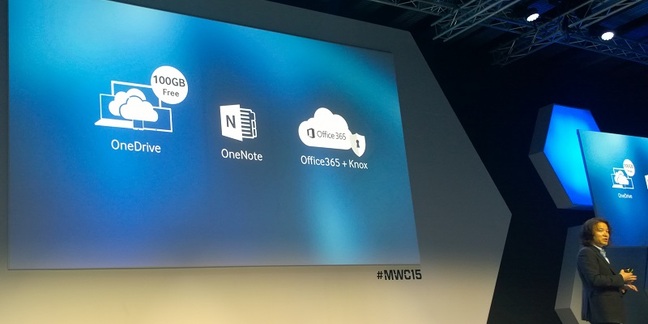 Knox is a secure container built into Samsung’s Android devices. It includes both hardware and software components, and enables businesses to separate and protect corporate data on mobile devices.

Today I’m going to tell you about additional productivity applications from Microsoft. We have a deal with Microsoft which will be announced in a week or so, we’ll have a big announcement, so you have a sneak preview. We’ll have Microsoft OneDrive, and OneNote, and Office 365 come with Knox Workspace. When you download Knox Workspace, this comes pre-loaded.

“Employees can be authenticated through KNOX Workspace’s full support for Microsoft Workplace Join. Workplace Join enables users to register devices with an enterprise to allow access to its data and systems, providing a second factor of device authentication through Active Directory.”

At Google’s I/O conference last year, Samsung and Google announced that the Knox technology would be rolled into Android. Curiously though, Google’s Android for Work initiative does not use Knox.

Here at Mobile World Congress, Microsoft’s Andrew Conway, a director in Enterprise Mobility product marketing, told me the company has no plans to support Android for Work. It seems that for the moment Android for Work and Knox are competing solutions.

Google has its own competing productivity apps for businesses, whereas Samsung has no equivalent to Office 365.

The Samsung-Microsoft deal shows the strength of Microsoft’s desire to get its cloud services and Office productivity tools established on Android, especially in a business context. ®