Vid “That's odd” must be a scientist's favourite phrase: a set of images of a distant supernova has shown off a phenomenon first predicted more than 50 years ago in 1964.

The supernova was spotted in Hubble images by Dr Patrick Kelly of Berkeley while searching for distant galaxies – and because of the effect of gravitational lensing, it appears not once, but four times – apparently at different places and (slightly) different times.

It's just the one supernova, however: the huge gravity of the MACS J1149.6+2223 cluster has bent light to make the supernova appear in a configuration referred to as “an Einstein cross”.

The observation gave astroboffins a yardstick with which they can measure a bunch of different assumptions about the state of the Universe when the star exploded: the Theory of Relativity, the strength of gravity at the time, dark matter, and dark energy. 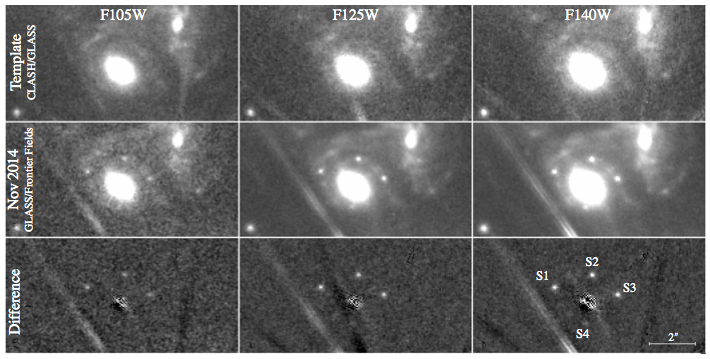 It's not four supernova, it's one through a gravity lens, in an "Einstein cross" configuration

Gravitational lensing was first predicted by Einstein: the presence of enough mass, he reasoned, would bend light passing an object.

As the paper, published in Science, explains, in 1964, Norwegian astronomer Sjur Refsdal, theorised about how this could be observed. Dr Brad Tucker, part of the team that wrote the paper, explained to The Register that Refsdal's idea was to use “time-delayed images from a lensed supernova to study the expansion of the universe”.

The paper explains this is the first time the phenomenon has been spotted: “Many decades of transient searches, however, have not identified an example of a SN visible at multiple positions around a gravitational lens”, it states.

What's got the boffins excited is that the supernova – no designation yet, but those working on it have nicknamed it “Refsdal” – gives them insights not just into the expansion of the universe, but also dark matter.

Having multiple views of the supernova is also important: “The time delay … allows us to probe the expansion rate in the intervening time,” Dr Tucker said in an e-mail.

“The time delay between the images … is inversely proportional to Hubble's Constant [the rate of the expansion of the universe – Ed].

“This is is partly related to the fact that the universe decelerated before it accelerated,” he continued. And, excitingly, “this deceleration took place around where this supernova is located.”

That provides a yardstick by which the researchers will be able to measure the expansion rate of the universe at the time the supernova happened, as well as allowing researchers “to directly probe the shape of the intervening space”.

Since the different “arrivals” from the supernova are affected by the intervening dark matter, the expansion of the Universe, and the “shape” of the Universe through its different paths, the researchers say they can test these different parameters agsinst the new observations.

“We also have other evidence that limits the ranges of these, so we can use this one object to constrain the relation of all these,” Dr Tucker said.

Even better: as well as there being archival images dating back to 1995 to help feed the calculations, the scientists expect the same lensing will yield more observations after 2016, as the video below illustrates.