No, but it's a science lab sent to tiny planet tucked between Mars and Jupiter 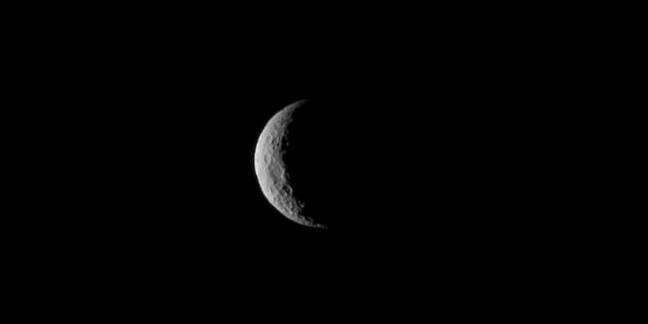 Vid + Pic After seven years, and more than three billion miles of travel, the Dawn spacecraft has been captured by the gravity of the Solar System's dwarf planet Ceres. The NASA probe entered a stable orbit at 0439 PST (1239 UTC) on Friday.

"We feel exhilarated," said Chris Russell, principal investigator of the Dawn mission at the University of California, Los Angeles (UCLA). "We have much to do over the next year and a half, but we are now on station with ample reserves, and a robust plan to obtain our science objectives."

Dawn was belatedly launched in September 2007 with a twin mission to study the two most massive objects in the asteroid belt between Mars and Jupiter, and to test the practicality of using ion drives to explore the Solar System.

In the latter case, ion drives are now considered a proven technology, and commercial satellites use them to maneuver around Earth, cutting the weight of fuel needed by 90 per cent. Dawn carries less than a tonne of liquid xenon, and wouldn’t have been able to reach Ceres using rocket fuel: launching all that material in space would be too expensive.

The Dawn spacecraft has used its three xenon-powered thrusters, along with a tricky gravity assist from Mars, to conduct its mission. In 2011 it successfully made it into orbit around the massive asteroid Vesta and spent 14 months making high and low passes over the huge chunk of space rock before heading off to Ceres.

Astronomers have been intrigued by the early images sent back of the dwarf planet, in particular by a series of bright spots that have appeared on the surface. These may be volcanoes, or frozen lakes of ice reflecting back the Sun’s rays, or even the lights of a distant civilization as some more excitable people have suggested.

We will now get to the truth of the matter, as Dawn works on its final maneuvers. The spacecraft is orbiting in the dwarf planet’s shadow but by mid April, a series of ion thrusts will bring it into a lower orbit covering Ceres’ sunward side and begin scanning the surface.

For science, the spacecraft carries a visible and infrared thermal-imaging spectrometer, a 66-megapixel camera, and the Gamma Ray and Neutron Detector (GRaND), and all will now be focused downwards on Ceres.

The dwarf planet is an intriguing target. Discovered in 1801, Ceres was first thought to be a planet in its own right. It makes up over a third of the mass found in the asteroid belt, but was judged just a little too small to achieve planet status once better telescopes could estimate its size.

Hopefully Dawn’s analysis will give us clues as to how these types of bodies were formed in the early history of the Solar System, and what keeps them together. It is thought Ceres has a thin atmosphere and a lot of water, and this could make it a useful spot if mankind ever decides to get serious about colonizing our tiny segment of space. ®