The Rise of Islamic State, Touch and I Am Radar

Where did ISIS come from? How do we feel? And some quantum fiction

Page File El Reg bookworm Mark Diston pores through publishing's latest tomes. Seasoned journo Patrick Cockburn details the fall out of the war on terror. David J. Linden takes us on a tour of one of our lesser-regarded senses and Reif Larsen bewilders with his latest work of fiction.

The Rise of Islamic State: ISIS and the New Sunni Revolution

I use the liberal press in the UK for my daily two minutes of hate, yet amongst the dismal undergraduate worldview there are a few exceptional commentators. The Independent may have been running The Ten Best Sex Toys for longer than The Mousetrap's been in the West End for, but it has a pair of Middle East correspondents who are a cut above the average.

There is Robert Fisk, the author of The Great War for Civilization, who has lived in Beirut for years and maintains a steady stream of informed journalism. Then there is Patrick Cockburn, who was virtually a lone Cassandra in warning the world about the advances of ISIS before their lightning victories last summer.

Cockburn had already completed a book about the return of jihadists which had been overtaken by circumstances. The Rise of Islamic State: ISIS and the New Sunni Revolution is an updated version of his previous work which was made obsolete by events in 2014.

He begins by recalling the ISIS defeat of Iraqi army and their occupation of Mosul, the major event that finally brought the organisation to world attention. He takes us to the origins of the war on terror and how ISIS came to be:

“The war on terror for which civil liberties have been curtailed and hundreds of billions of dollars spent has failed miserably… because it did not target the jihadi movement as a whole and, above all, was not aimed at Saudi Arabia and Pakistan, the two countries that fostered jihadism as a creed and as a movement.” 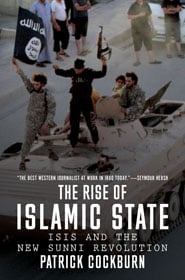 He goes on to say: "28 pages of the 9/11 commission report about the relationship between the attackers and Saudi Arabia were cut and never published."

Cockburn adds elsewhere that no Saudi citizen had been charged with supporting terrorism abroad since 9/11, adding that “a reason for waterboarding Al-Qaeda suspects was to extract confessions implicating Iraq rather than Saudi Arabia.”

He describes how after the American invasion of Iraq and subsequent campaign of de-Ba'athification led to a Sunni uprising, particularly in Anbar province, the large desert region that adjoins Syria and how this had died down after “The Sunni Awakening” – a tribal counter-offensive against the jihadists.

A sectarian Shia government in Baghdad – which progressively isolated the Sunni heartlands – followed by the US troop removal and the Syrian civil war all combined to bring about the founding of the Islamic State.

Cockburn astutely compares the situation in Iraq and Syria to The Thirty Years War in seventeenth century Europe. The schisms, the ultraviolence, the ignorance and bigotry of the religiously deranged… plus ça change, plus c'est la même chose.

The situation in Iraq is best described by one of Cockburn’s interviewees who says: “I never imagined that ten years after the fall of Saddam, you would still be able to get a man killed in Baghdad by paying $100.”

And the future for ISIS? “People who relate to their opponents largely through snuff movies are unlikely to be in a mood to compromise.” Plenty of blood and fire then. The Rise of Islamic State is an important and revealing book which is essential reading to those who wish to dig deeper than the headlines and the soundbites.