Intel SoCs it to 'em with new D: Tiny but powerful

After some teasing late last year, Intel has taken the full wraps off the Xeon D: a system-on-chip (SoC) version of its data-centre darling that it hopes will excite hyperscale operators and those keen on very dense server rigs.

The Xeon D will come in four and eight CPU core models, D-1520 and D-1540. Each will run two threads per core, at a list price of $199 and $581 respectively. The Broadwell 14nm microarchitecture powers both packages, and they are in production.

Manufacturers are already picking them up for 50 designs, we're told, for networking gear, back-end controllers of internet-of-things devices, storage systems, and more. It's not targeted at core data centre gear – that's for the Xeon E series – but it's for the "edge" of the data centre.

Intel knows the new CPUs overlap with its Atom-packing ARK (formerly Avoton) SOCs, so is using metrics like “performance per node” and “performance per watt” to describe the products. Unsurprisingly, the Xeon D comes out on top in those metrics.

Tim Prickett Morgan
The idea is to take the fight to the ARM market at the moment that the ARM collective is bringing the fight to Intel ...
Read more on

The new chips are proper Broadwell Xeons, so enterprise features like virtualisation extensions, trusted execution technology and encryption-speeding AES-NI are all present. There's even some new inclusions in the form of a on-die power management system that can control power consumption without waiting for the operating system to dictate terms.

Intel is pitching the devices at “web hosting, memory caching, dynamic web serving, and warm storage” applications, but will also try to excite telcos about the chips' potential to power software-defined routers or run wireless base stations.

In a briefing about the devices, Intel pointed out to The Register that 90 per cent of telco kit is proprietary and/or single purpose. Chipzilla, like the many companies making network virtualisation, software-defined data centre and network function virtualisation plans, clearly hopes to replace incumbent telco equipment providers with server-based rigs delivering services from software instead of dedicated devices.

The SoCs certainly have the grunt to pull off software-defined networking: both pack twin 10Gb ethernet, eight USB ports (four apiece of 2.0 and 3.0) and more PCIE lanes than you can poke a stick at (we think 28 was mentioned in the briefing).

Intel seems unworried by overlaps with Atom SoCs, which it sees as having roles in less demanding machines. Nor does it feel that the market for conventional Xeons is at risk: the model Ds are plenty powerful, but aren't designed to handle the weightiest transactional workloads.

Except for the fact they probably are, if users are willing to build the kind of data centres that this kind of designed-for-density device will require. 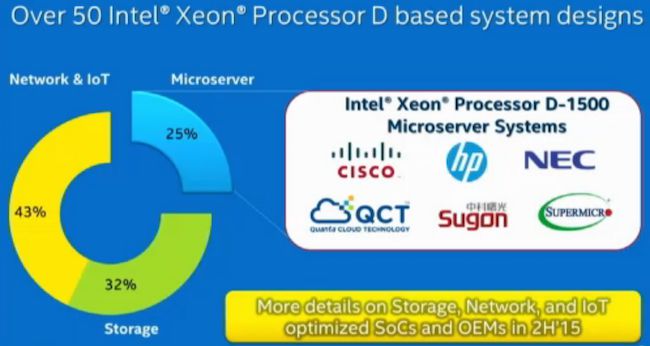 Xeon D presentation slide ... where the chips will be used

As it happens, that kind of data centre is where boosters of ARM servers were aiming their wares. With Xeons now capable of doing the density dance, and offering a no-compromise X86 experience, the likes of Cavium may now be facing stronger headwinds. ®