Antique Code Show 1990s console gamers were curiously obsessed with the notion of game conversions being “arcade perfect”. Of course, such hopes were invariably dashed on the hard rocks of reality – hardly surprising when arcade hardware tended to have far superior specs to home machines. 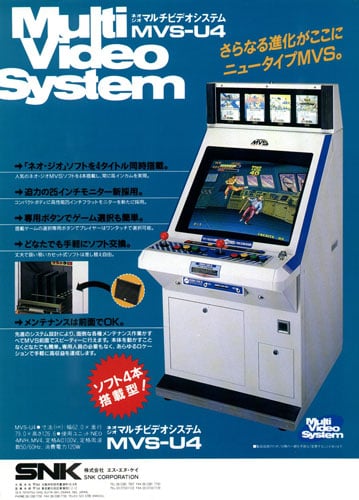 Japanese developer SNK presented a magnanimous solution: why convert the arcade when you can own it? The Neo-Geo Multi-Video System (MVS) had become a great hit with arcade owners due to its relatively low cost of ownership and ability to hold 4 titles within one cabinet.

The Advanced Entertainment System (AES) home equivalent began life as a rental concept, though the venture quickly upscaled when SNK realised that demand existed to own the beastly machine. Twenty five years on and the console’s legacy is yet apparent.

Yes, the astronomical price tag attached to the console – and more significantly, the games – were enough to put most gamers off; we are talking up to £200 per cartridge. Yet a significant number of crazed punters were prepared to chuck money at the Neo Geo, making it quite the grand everlasting daddy of consoles, surviving from 1990 until its final cartridge release in 2004.

Featuring a 68000 CPU coupled with a Zilog Z80, the Neo Geo was marketed as a 24-bit console – not strictly true, though undoubtedly it did blitz the 16-bit crowd of the time. It was the range of custom graphics processors that granted the machine its true glory, including hardware scrolling, 4096 colours displayed simultaneously and dynamic hardware scaling of the 380 on-screen sprites.

Further PR chutzpah came in the usual shape of games being measured in megabits not megabytes (8 megabits in a megabyte) and general hyperbole like “Max 330 Mega Pro Gear Spec” tattooed on the console itself. 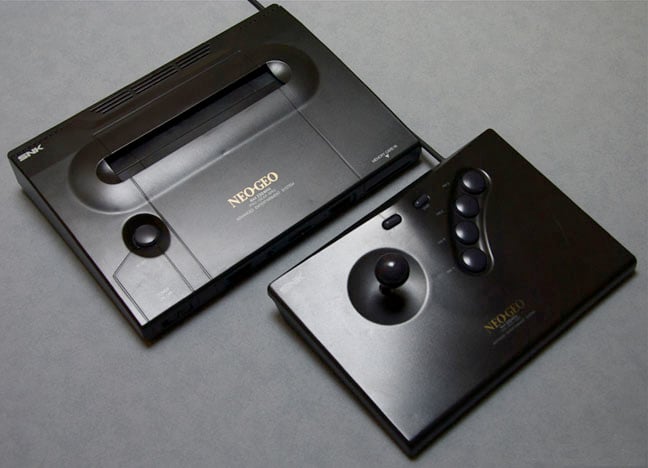 Controllers were almost as large as the console, with an industrial-style joystick and four chunky buttons, just like an arcade unit. It was always a bit weird holding the controllers on your lap – you needed to clamp them down for the full arcade effect. No wonder some passionate individuals superglued them down to kitchen units.

The console was also the first to use memory cards (JEIDA version 3 spec) to deliver a game save function. A novel idea was that you could continue your game whether using an arcade or home Neo Geo system – though whether that happened in reality is another matter. Neo Geo owners were often rather skint from buying games, and were unlikely to be looking for frivolous reasons to chuck coins into arcade games they already owned… surely?

The 15-channel Yamaha YM2610 DSP that blasted out tunes and effects needs to be given huge credit for atmosphere Neo Geo created. While game visuals were no doubt attractive, it was the funked-up beats, speech samples and effects carried by this sound chip that really intensified the experience of many titles. When players plugged their Neos into a decent pair of speakers and pumped up the volume, the all-encompassing audio delivered that gloriously lucid and effectual mix of sounds arcade gaming was famed for.

We took a shot every time Qualcomm said 5G, AI or mobile gaming in its Snapdragon 865, 765 system-on-chip launch...

Is Google's new cloud gaming service scalable? Yes but it may not be affordable, warns edge-computing CEO

Polystream says the future of hi-def gameplay is distributed

Thanks for all that Kickstarter cash – upstart gobbled by Razer