Linux container outfit Docker has expanded its staff yet again, this time by gobbling up the creators of a GUI Docker management tool for OS X.

Kitematic, which became an official Docker product on Thursday, wraps Docker's command-line container wrangling tools in a point-and-click interface that simplifies the process of spinning up containerized applications on Macs.

The software interfaces with VirtualBox to automate the process of creating virtual machines in which to run the Linux-based containers, and it connects with the Docker Hub to allow easy pushing and pulling of images.

It also takes advantage of Docker Machine, one of the company's recently announced orchestration tools, to set up a developer's Mac to act as a Docker host.

"Where it used to take people between 30 minutes and an hour to get up and running with Docker, basically you can now have Jenkins [or other software] up and running in three minutes," Justin Stepka, Docker's director of project management, told The Reg in a phone briefing. 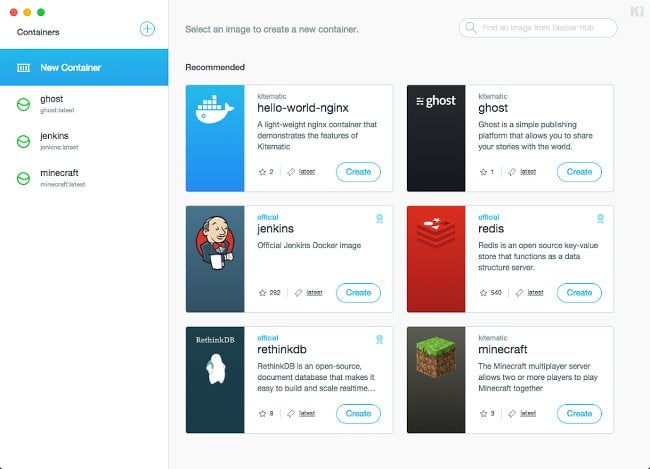 Kitematic is the brainchild of Michael Chiang, Sean Li, and Jeffrey Morgan, who met while students at the University of Waterloo in Ontario, Canada and later moved to the San Francisco Bay Area to found their company.

All three will now join Docker's team in San Francisco, where they will work on Kitematic full-time.

"Kitematic aligns with Docker's strategy around open source acquisitions, which is to identify those  who have exhibited leadership in the ecosystem and that share a vision of expanding critical tooling for developers and sysadmins," Docker said in a press release.

The first version of Kitematic targets OS X because of the platform's popularity with developers, but Stepka told The Reg that a future release of the software will address the growing interest that Docker is seeing from Windows users, particularly in light of Microsoft's planned support for Docker containers in the next version of Windows Server.

Expect that Windows version of Kitematic to appear around the second quarter of 2015, Stepka said. ®