Junk DNA: A Journey Through the Dark Matter of the Genome

Nessa Carey is a virologist, biologist and a visiting professor at Imperial College. She is the author of The Epigenetics Revolution. She defines Junk DNA as any that does not encode for protein, i.e 98 per cent of it. Carey goes on to state that the human genome contains 20,000 protein coding genes, so I guess that makes 980,000 of the junk variety, according to the author: “Each protein coding region is like a single word adrift in a sea of gibberish”

Carey’s enthusiasm for her subject is infectious; Ernest Hemingway’s cat (the genetic equivalent of Schrodinger’s I assure you), Samuel L Jackson and Oscar Hammerstein are drafted in to liven up what is essentially a dry scientific text about a complex subject.

You can imagine Carey is not above interrupting her lectures with a few song and dance moves. The relationship of the length of DNA to a cell nucleus is described with a schooliesque simile: “This is like trying to fit something that is the vertical height of Everest into a capsule the size of a golf ball” 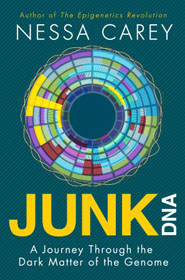 At one point there would seem to be a few tabloid hysterics creeping in, including such gems as “a fleeting moment lasts forever”, “chromosomal intimacy”, and “the mother of one night stands”. The text then – thankfully? – subsides into lists of enzymes and paragraphs of impenetrable acronyms.

We learn that a bizarre array of syndromes originate in the Junk DNA department, such as the fabulously titled Fragile X syndrome, Freidrich’s Ataxia, Diamond-Blackfan Anaemia, Burkitt’s Lymphoma, and so on. In Carey’s opinion, despite DNA “being the poster child for biology, all life on earth may have originated not with DNA but with RNA.”

In places, Carey’s description of the extracellular origin of mitochondria comes over a little Ayn Rand: “Without them we would be smelly little four celled nobodies with hardly enough energy to do anything useful”

Carey goes on to relate the discovery of various functions of Junk DNA, how HOX genes affect anatomy and how transplanted genetic material in fruit flies led to the growth of limbs from their heads.

She then describes the work of The Encode Consortium whose task is to map the “untranslated regions” of the human genome thusly: “The Encode Consortium identified a daunting abundance of potentially functional elements in the human genome” the last part of the book proposes Junk DNA as the cure as well as the origin of many of the genetic syndromes which come from these same areas.

Nessa Carey has done a splendid job of bringing to life this most arcane and obscure of subjects. This is a book for the interested layperson with a basic understanding of the biological sciences. Admittedly, it does occasionally get lost in lists of acronyms and enzymes but never for long. Junk DNA, while not for the faint hearted, is an excellent introduction to a subject that we are certain to be hearing a lot more about in the near future.