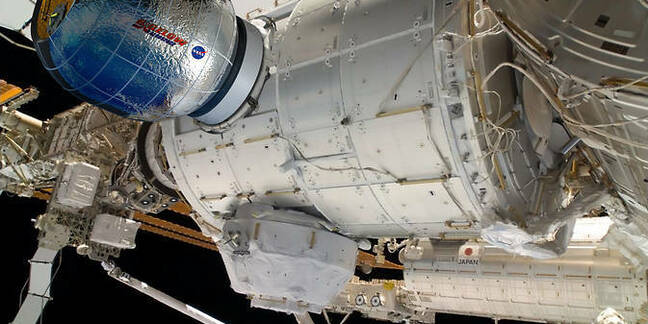 Vid + pic Nevada-based Bigelow Aerospace has been showing off the latest addition to the International Space Station: an inflatable module that will be used as a lounge and test facility in orbit.

The Bigelow Expandable Activity Module (BEAM) is a 13ft by 10ft inflatable capsule that will be lofted up to the ISS as part of a SpaceX resupply mission on September 2, weather permitting. The 3,000lb unit will be attached to the ISS for two years and give the crew somewhere new to stretch their legs.

The BEAM uses multiple layers of high-tech fabric to keep the air in and micrometeorites and other space debris out. By eschewing metal, the Bigelow module is much cheaper to get into orbit than a standard capsule, and the cloth walls have been extensively tested.

Bigelow launched its first bubble capsule into orbit in 2006, and a second one in 2007. They are both still in orbit, and the outer skin has survived longer than expected. The BA330, a 45ft by 22ft module that the firm wants to use as a habitat in space and on other planets (think space hotels), is entering production.

In 2012, NASA signed a $17.8m deal with Bigelow to provide a module for the ISS, and on Thursday Bigelow showed off the space-station-bound module to the press.

"NASA understands that the agency can generate more innovation and attract more investment in space by partnering with America’s commercial space industry and its entrepreneurs," said NASA Administrator Charles Bolden.

"Our plans for exploration in the 21st century intentionally rely on American commercial partners in every aspect of what we do, whether it is rockets to get to space or new technologies such as the BEAM expandable habitat for living in space." ®