For when flashy failure is just not an option

Fujitsu’s ETERNUS DX200F all-flash array (AFA) is always up for it even in the face of catastrophes, the firm says.

The DX200 all-flash array was announced in April last year, offering the same performance – Fujitsu said – as specially-designed flash architectures, but for less money, due to its standard system architecture: meaning SSDs and no special hardware.

It then came out with an SPC-1 lowest-ever response time benchmark win.

That has since been beaten by Fujitsu’s own DX600 S3 array.

The DX200F is disaster proof according to Fujitsu, with data synced between two DX200F systems using storage clustering. Should one fail, the other automatically takes over, with users not seeing any downtime. All application access is maintained in real time. 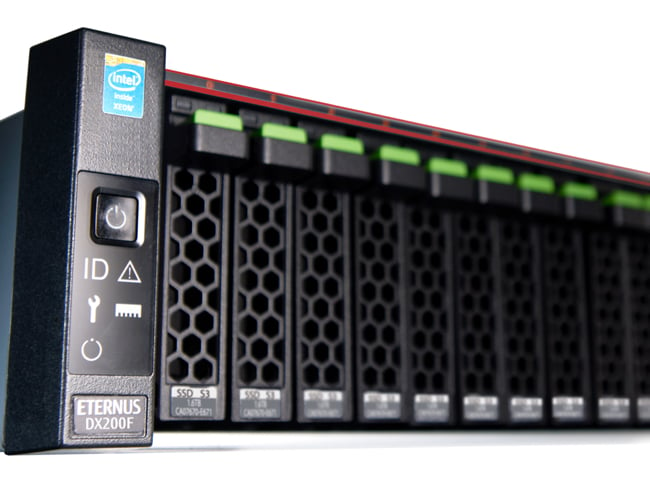 Fujitsu says the DX200F’s all-flash array performance, combined with “complete disaster resilience... is currently unique in today’s market”. In other words, Fujitsu would have us understand no other all-flash array from any vendor offers complete disaster resilience. So the DX200F is presented as the only AFA suitable for mission-critical usage where system failure is not an option.

EMC might suggest that a combination of VPLEX and two XtremIO arrays could offer the same level of automated failover against disaster.

The DX200F array features 5-24 SSDs providing up to 38.4TB of capacity. Failover can be controlled manually, for scenarios such as planned power shutdowns, disaster recovery tests and non-disruptive upgrades.

The DX200F is available now from Fujitsu or its channel. Prices vary depending on configuration and region. ®