Next version of Office for Windows is unveiled

Tell me what you want to do...

In the ribbon you will also spot a new “Tell me what you want to do…” input box, essentially a text search for Office commands. If you are accustomed to typing in places like the Start menu or Control Panel to find what you want, you will find this works in much the same way, showing all matches and letting you activate the one you require. Type Equation in Word, for example, and up comes Insert an Equation, Equation Symbols, and Equation Options. Given the huge number of buried features in Office, this is a great feature. This "Tell Me" box appears in Word, Excel and PowerPoint, but not in Outlook, OneNote or Publisher. 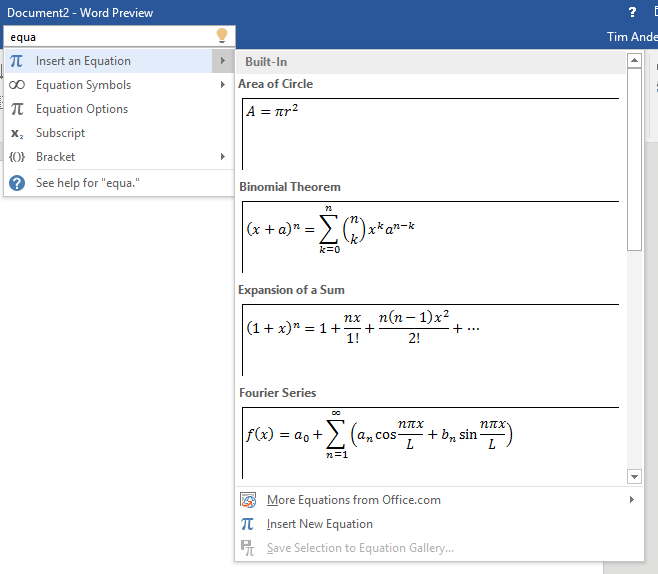 Using "Tell me" to insert an equation

High DPI support has been extended to allow 250% and 300% views for clearer views on large displays.

Outlook’s Attach File button is smarter, and now shows a list of recently used documents. Since you probably want to attach something you have been working on, this works well. It also offers to email a link rather than an attachment if it detects a SharePoint or Office 365 document, though this seemingly does not include documents synced to the local PC, making it less useful. 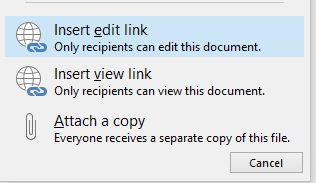 Outlook accounts can be set to download less mail – as little as only those emails received in the last day, according to Koenigsbauer – though the preview only goes down to 3 days. There is also a thing called “automatic full screen reading in portrait view” which kicks in when Outlook is in a narrow portrait view, such as you might get on a small Windows tablet. The message preview slides over the message list for reading, and you hit the back button to dismiss it.

Outlook’s internals have been updated, including the use of MAPI over HTTP (MAPI-HTTP) for connecting to Exchange, rather than the old RPC (Remote Procedure Call) sync. The difference is described here and should give a faster and more resilient connection. It is not really new though, since it was introduced in Exchange 2013 SP1 and Outlook 2013 SP1, in 2014. Koenigsbauer also states that all networking calls are now in the background, to avoid a frozen UI, and describes improved search and faster email delivery.

Microsoft’s Data Loss Protection is now better supported. This is an enterprise feature that enables policy such as disallowing document sharing. This is now built into Word, Excel and PowerPoint as well as Outlook, so that policies are enforced or warning tips displayed. The new Outlook also support Office 365 Multi-Factor Authentication, whereas previously users had to create a less secure secondary “app password” instead. Information Rights Management has been added to Visio.

There are no changes to the macros and add-in support in Office, which is probably welcome stability. Microsoft’s idea of an Office app means something that lives in the cloud and that hooks into SharePoint rather than the old idea of Office automation, so it is not surprising to see little change here.

The preview is available to business users with the right kind of Office 365 subscription, though note that it will not install alongside Office 2013, so is best tested on a spare PC or virtual machine.

At Convergence, Microsoft also announced full availability of Delve, a document search service in Office 365. The service uses “signals” from email, document contents and their authors to surface what it thinks is of most interest to you, using a machine learning system called the Office Graph. “Think of this as your work newsfeed,” said Microsoft CEO Satya Nadella in his keynote. I have been trying Delve in preview for some time and it works nicely as a search service, though to learn how successful it is in the context of a large company we await reports from others.

Although Office 2016 is thin (so far) in terms of new features, the changes here are worthwhile. Microsoft is focusing its effort on its “Office everywhere” story, and meeting the needs of admins looking for better compliance and data protection, rather than revamping the desktop edition. That is fair enough; but the cloud sync technology has to be excellent since annoyances here detract from the appeal of Office 365, for business, or OneDrive for consumers. ®