Beepy bows out, and trots off for some new adventures (and pizza)

Brian Pawlowski, the founding and lead tech head for NetApp’s wannabee high-flying FlashRay all-flash array, has left the company after a 20-year stint, and become a VP in a new venture.

Beepy, as he is known, was an SVP and member of NetApp’s technical staff, and NetApp’s chief technology officer from August 2006 to May 2012. He joined NetApp as a performance engineer in January 1994 after being a staff engineer at Sun Microsystems.

Now he appears to have joined a startup (A New Venture, apparently), saying: “I work with a small group of brilliant people.”

Pawlowski was SW development head for a while and “started and led the project to create Network Appliance's unified storage product serving both the SAN and iSAN market".

Ultimately, when NetApp decided it needed a ground-up designed all-flash array product he became head of the Mars project, the FlashRay HW and SW development, a quasi-internal startup, in October 2012.

In the event, FlashRay has fallen short of its goals. A single controller version on limited release was unveiled in September 2014. NetApp said customers should buy all-flash ONTAP arrays for full and flash-speed NetApp data management services. 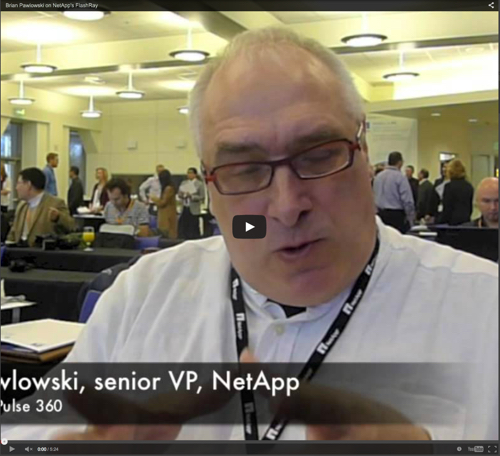 Pawlowski in a FlashRay video. Click image to roll the video

The EF540/560 products provide even faster flash array performance but without ONTAP data management services. FlashRay was positioned as a system for database use, once it was developed, and product managers like Ty McConney suggested it had a role involving TLC flash, inherently slower than the MLC flash used in the EF540/560- and all-flash ONTAP.

This implied that the original FlashRay goals, understood to involve building a machine capable of taking on products from Pure Storage, EMC’s XtremIO and similar systems, had been abandoned. McConney went on leave of absence, and the FlashRay project was absorbed by all-flash ONTAP in a Performance Products Group.

Pawlowski took a break, we were told in late February, and has now resigned from NetApp. His LinkedIn entry reads: “It was my privilege to work with a world class team, on the hottest technologies using cutting edge tools and development practices. What a blast!”

Is FlashRay a failure?

To the extent that it is not a product anyone would put forward in a bid to win against competing all-flash arrays (from any other mainstream or prominent start-up supplier) it certainly is a failure.

Whether and how its development will continue is a question now being handled by Dave Mason, head of NetApp’s Performance Products Group. As a putative all-flash-array product class winner it’s a dead duck.

The TLC emphasis McConney mentioned may still indicate it has a role as a product outside the ONTAP mothership. I guess we'll have to wait and see.

Pawlowski is also a partner in a pizzeria restaurant, the Terún in Palo Alto. Cooking is by means of a traditional wood-fired oven, no flash rays here. ®