I can tell from your genetic markers that y'ain't from round 'ere, are ye? 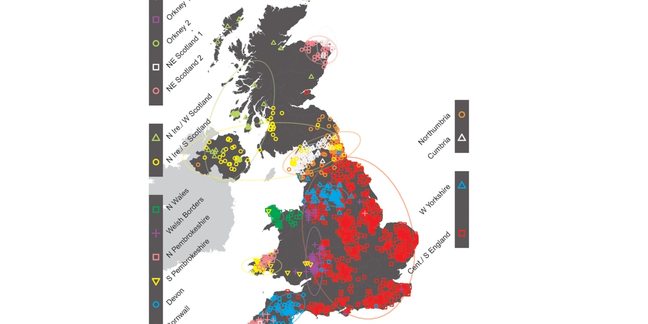 An international team of researchers have created a fine-scale genetic map of the UK, the first time such a map has been produced for any country in the world.

The fine-scale genetic variation between human populations is of interest to researchers both as a means of tracking historical population movements, and for its ability to inform statistical analysis of how diseases develop amongst populations.

The People of the British Isles study was funded by the Wellcome Trust, a global charitable foundation "dedicated to improving health by supporting bright minds." It was published in the journal Nature.

The international research team, based across Oxford, UCL, and the Australian Murdoch Childrens Research Institute, analysed the DNA of 2,039 people from rural areas of the UK, whose four grandparents were all born within 80km of each other. As a quarter of an individual's genome comes from each grandparent, the researchers were effectively sampling DNA from these ancestors, allowing a snapshot of UK genetics in the late 19th century.

To uncover the extremely subtle genetic differences among these individuals, the researchers used cutting-edge statistical techniques to separate the DNA samples into genetically similar individuals, without knowing where in the UK the samples came from. By plotting each person onto a map of the British Isles, using the centre point of their grandparents' birth places, they were able to see how this distribution correlated with their genetic groupings.

Zooming in to examine the genetic patterns in the UK at greater levels of resolution, the researchers found that the population in Orkney emerged as the most genetically distinct. At the next level, the geographical area of Wales formed a distinct genetic group, followed by a further division between north and south Wales.

The next zoom showed the north of England, Scotland, and Northern Ireland collectively separate from southern England, before Cornwall ultimately formed its own separate cluster. Further distinctions could again be found as Scotland and Northern Ireland separated from northern England. The study eventually focused at the level where the UK was divided into 17 genetically distinct clusters of people. The pattern of genetic differentiation revealed a "remarkable concordance between genetic clusters and geography."

In terms of historical migrations, the boffins findings allowed them to suggest "significant pre-Roman, but post-Mesolithic, movement into southeastern England from continental Europe."

Their work confirms details about known migration patterns and also suggests an end to some ongoing debates. Among their key findings, the relative homogeneity of the eastern, central and southern English genetic group with a significant DNA contribution from Anglo-Saxon migrations (10-40% of total ancestry) settles a historical controversy in showing that the Anglo-Saxons intermarried with, rather than replaced, the existing populations.

The findings also do away with notions of a single, pre-Saxon collective, showing that "in non-Saxon parts of the United Kingdom, there exist genetically differentiated subgroups rather than a general ‘Celtic’ population."

Dr Michael Dunn, Head of Genetics and Molecular Sciences at the Wellcome Trust said: “These researchers have been able to use modern genetic techniques to provide answers to the centuries-old question - where we come from. Beyond the fascinating insights into our history, this information could prove very useful from a health perspective, as building a picture of population genetics at this scale may in future help us to design better genetic studies to investigate disease.”

Some other key findings included the discovery that the separate genetic groups in Cornwall and Devon divided almost exactly along the modern county boundary. This is a very localised instance of a something that occurs on a national level too, as many of the genetic clusters of the UK show similar locations to the tribal groupings and kingdoms around end of the 6th century, after the settlement of the Anglo-Saxons, suggesting these tribes and kingdoms may have maintained a regional identity for many centuries, and to a lesser degree, perhaps still do. ®

The shifting SANs of enterprise IT: You may have been burned in the past, but live migration is and will be your friend

Comment You got hurt, we get it. But you can't ignore your data-center's workhorse

Up in the heir: Inheritors enduring huge delays after botched migration at UK probate service

Backlog not helped by spike in applications to dodge fee hike

Error pop-up? Don't worry, let's just get this migration done... BTW it's my day off tomorrow

On Call Moral of the story: It's never going to be 'fine'