Lander on 67P is caught in a crack, didn't hear mother's 'come back'

The Rosetta probe's attempts to determine if the Philae lander is alive have come to nought.

The Rosetta mission departed Earth in 2004 and planned to reach Comet 67P/Churyumov-Gerasimenko a decade later. That plan worked and the probe reached the comet then, as planned, send the Philae lander to 67P's surface. That plan also worked, mostly, save for Philae landing in a spot where its solar cells can't gather enough energy for it to do any work.

When Philae landed it ran on battery power for 54 hours, which was enough time for it to put all ten of its onboard instruments to work and beam back lots of data. But it's not been able to recharge, so has not been heard from since.

The European Space Agency (ESA) announced on March 10th that conditions were right to attempt contact with Philae, but now reports those efforts came to nought.

Rosetta's performance was apparently perfect, but no signals returned from Philae. ESA boffins are therefore pondering two scenarios. The first is that the lander hasn't been able to gather sufficient energy to activate its radio, so received the commands from Rosetta but didn't have the energy required to send a response. This is the good news scenario, because Rosetta sent instructions “to most effectively divide the available solar power between heating and communications” in order to give the lander the best chance of getting its radio working.

The second scenario is the bad news version, as it postulates that Philae is in such a state that it did not receive the commands.

Even if scenario two is correct, all is not lost. Come April, Rosetta will once again be well-placed to attempt contact. Moreover, the closer 67P gets to the sun, the greater the likelihood Philae will find itself able to gather solar energy.

Further good news comes in the form of the illustration below, an ESA visualisation of the spot in which Philae came to rest. 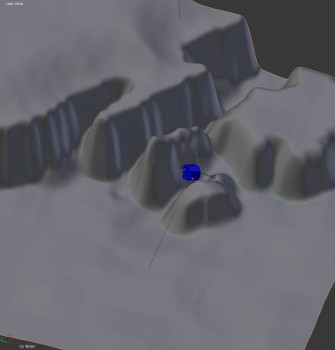 The likely position of Philae in a visualisation of a topographic modeling of the comet's surface
Image: ESA/Rosetta/Philae/CNES/FD

ESA boffins are confident that Philae will re-awaken, as it was built to survive on 67P. ®