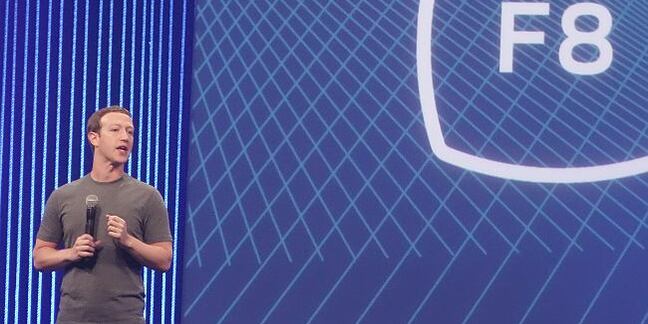 F8 2015 Facebook is giving businesses a boost in its Messenger chat app, by making companies and brands first-class citizens on the social network.

Developers will soon be able to integrate their own apps with Messenger via a new facility called Messenger Platform, while businesses will be able to enhance online shopping via an offering called Businesses on Messenger.

"Currently, if you want to get in touch with a business, most of us probably still call," Zuck said. "But I actually don't know anyone who likes calling businesses. It's just not fast or convenient and it definitely doesn't feel like the future."

Later in Wednesday's keynote, David Marcus, Facebook's Messenger veep, said he hoped to restore some of the "personal and delightful experience" that customers have when shopping at local stores, some of which he said is lost with e-commerce.

And while users initially griped when Facebook split off Messenger into its own app – Facebook boasts 1.5 billion users, but Messenger has just 600 million, compared to WhatsApp's 700 million – the firm is banking that they'll come around once the app becomes more versatile and powerful.

With Messenger Platform, developers will be able to plug their own apps into Messenger to allow users to more easily share various kinds of media – including videos, photos, audio, animated GIFs, and more – substantially broadening the options for cat fanciers and spreaders of memes everywhere.

By way of example, Marcus demoed an app built by the JJ Abrams film studio that allows users to send videos enhanced with special effects.

When somebody sends something from an app that's integrated with Messenger, the recipient will also be able to find out about the app and easily install it themselves.

Businesses on Messenger, meanwhile, will allow companies to enhance their online presences with a variety of online interactions, ranging from live chat to interactive receipts for purchases, where customers can click on the receipt to track packages, make changes to their orders, or ask questions.

One advantage of Messenger over email for these kinds of interactions, Marcus said, is that while each new email starts a new thread, Messenger groups all interactions with a given company in one place, making it easier for customers to track their history with the company.

"We're reintroducing personal back to shopping online and on mobile," Marcus said.

Facebook has been working with an assortment of partners for each service. The initial SDKs for Messenger Platform are available now, while the Businesses on Messenger program is expected to launch within the next few weeks. ®