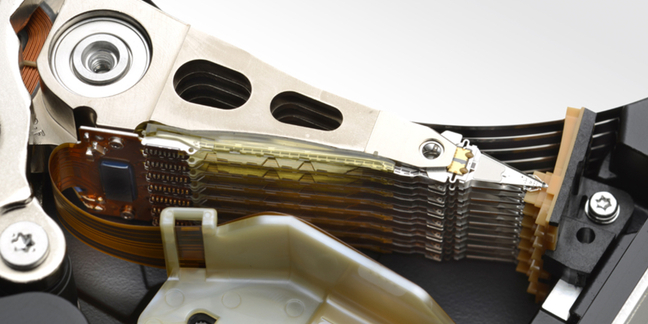 These drives have enclosures filled with helium instead of air. This is only 14 per cent of the density of air, so platters spin with less friction, vibrating less and needing less power. As a result, they can be thinner and HGST can squeeze 7 platters into what was previously a 6-platter air-filled space, giving it a platter-per-drive capacity advantage over air-filled drives.

After shipping a million-plus such He6 and He8 drives HGST is satisfied its HelioSeal technology keeps the notoriously leaky helium gas molecules inside the drive and has announced the death sentence for air-filled drives. It has confirmed that no new air-filled drives will be brought to market after the current set complete their run in two to five years time.

The He8 is a shipping 8TB helium drive and HGST is looking forward to a 10TB shingled helium drive coming in the second half of this year: it's sampling right now.

HGST has uprated its helium drives for two and a half (2.5) million hours mean time between failure (MTBF), a 15.5 per cent increase from the previous 2 million hours of HGST's Ultrastar drives, partially because the sealed drives prevent contamination from incoming particles, unlike air-filled drives. The proportion of helium drives in its total shipments will rise steadily, with 50 per cent being helium products by 2017.

It says customers will experience a lower total cost of ownership with helium drives because of;

Here's a canned customer quote from Jonathan Halstuch, CTO and co-founder, Racktop systems: "“The HGST Helium drives enable us to offer a cloud with revolutionary density and reduced power usage, which facilitates economically efficient storage of PBs of data for our customers.”

HGST foresees helium drive ubiquity in its product line. We might expect WD, Western Digital's other disk drive manufacturer, to also adopt HelioSeal technology, as parent WD sees it to be a sustainable and enduring competitive advantage over Seagate/Samsung and Toshiba. Although Seagate has 8TB (shingled) drives, they don't share the He8's reliability and lower TCO characteristics.

Toshiba has only entered the 6TB drive club relatively recently and has a higher hurdle to get over.

What can they do? The options would seem to be to adopt helium-filled drive technology themselves or, fantasy maybe, leapfrog over it and go instead for vacuum drives with zero platter atmosphere friction.

One last point: how long will a HelioSeal last before those persistent helium molecules find a way through? We've asked HGST. The He8 drives have internal environmental telemetry to monitor seal integrity and report any potential issues. They are warranted for 5 years, so you're certainly safe over that period. ®