It's hard to send and receive radio in a small space, but boffins reckon they've cracked it

Take a look at mobile standards like LTE and you'll notice that duplexing is difficult: it's either accomplished by separating uplink and downlink in time or frequency.

Why? Because it's really hard to use closely-spaced frequencies for uplink and downlink in the small space of a smartphone: the two signals will inevitably interfere with each other. That's because there's hardly any spatial separation between transmitter and receiver.

That's what makes this work from Columbia University a bit special: the chip is tiny, so small that it would not be normally capable of full-duplex transmission without separating signals by a nice wide frequency gap.

Most importantly, the Columbia team, led by electrical engineering associate professor Harish Krishnaswamy, has managed to cancel the interference the “loud” transmitter signal would usually have on the vastly quieter received signal. 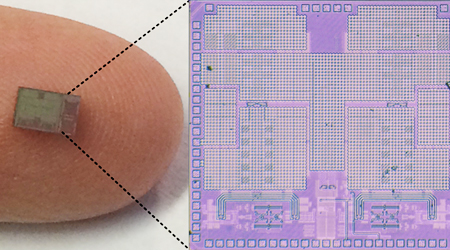 One chip, two frequencies, one big win for mobe-makers

The group presented its work to late February's ISSCC conference, and explains the concepts here.

Their approach is to embed the interference-cancellation circuits in a wideband noise-cancelling, distortion-cancelling amplifier, in what they call a “noise and leakage cancelling receiver” (NLC-RX) that works between 0.3 to 1.7GHz on CMOS.

As the university explains, standards like 4G/LTE already have a big spectrum footprint (with support for 40 frequency bands, Columbia notes). Dealing with the 5G means two things: greater expectations, and consequently even more pressure on spectrum.

Krishnaswamy and collaborator Jin Zhou next want to build full-duplex nodes so they can measure what gains might be achievable at the system level (rather than just the single transceiver). ®