Wannabe a nano-bot-manufacturing giant? Better cozy up to Apple

Apple's demand for minute mechanical gizmos in its iThings is more or less dictating who wins and who loses among MEMS manufacturers, analysts reckon.

Supply-chain researchers at IHS said the Cupertino idiot-tax operation's use of Micro-Electromechanical Systems (MEMS) and sensors in iPhones and iPods draws so much business that the factories landing Apple contracts will immediately top the market.

MEMS devices are moving mechanical systems and sensors shrunk down to the micrometre level. Because Apple requires MEMS hardware in its iOS devices, the California biz puts in orders for millions of units each quarter.

According to IHS, the current king of MEMS is Bosch Sensortec. The German giant holds the exclusive rights to provide pressure sensors for the iPhone 6 and 6 Plus handsets. This, combined with deals for the Sony PlayStation 4 and various automakers, gave Bosch a 12 per cent share of the MEMS market.

The strength of the Apple deal made Bosch the only billion-dollar MEMS supplier, and put Bosch ahead of traditional electronics giants such as Texas instruments, and STMicroelectronics.

The full top 10 ranking according to IHS is as follows: 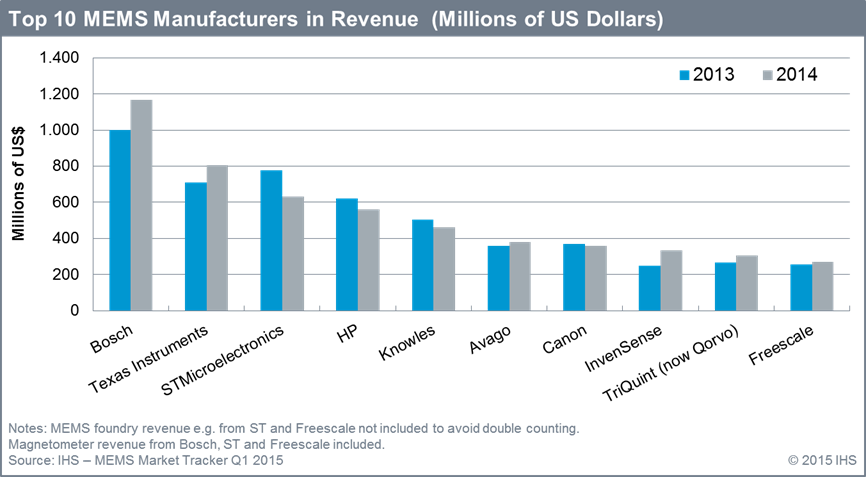 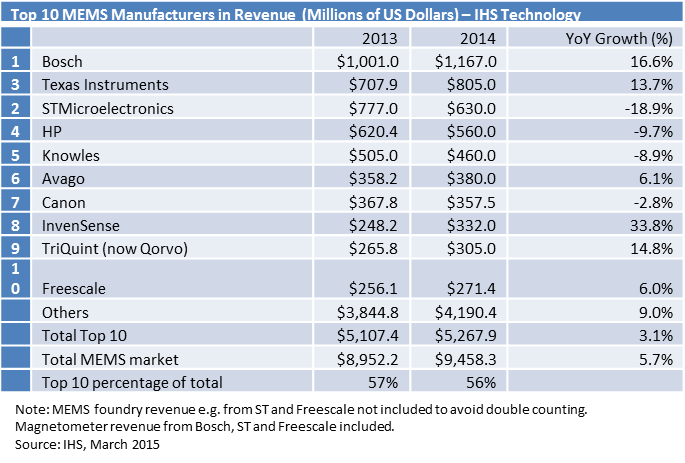 Growth (and decline) in the MEMS market (top) and a tablet of the figures (below) Source: IHS. Click to enlarge

According to IHS, Bosch logged $1.1bn of MEMS revenues last year, up 16.6 per cent over 2013's mark and well ahead of Texas Instruments' second-best $805m haul and STMicro's $630m. The analyst house valued the total MEMS market at $8.95bn in annual revenues.

Why is Apple so influential on the MEMS market? Sheer numbers. According to its last quarterly report, Apple shipped 74.5m iPhones between October and December. The Cupertino giant will ramp up demand for sensor hardware as it adds the Apple Watch to its iOS lineup next month. ®