If you’ve ever wanted to give Apple the finger…

That’s the only obvious change to the design of the MacBook Pro for 2015, which in most other respects looks identical to last year’s model – and the two years before that as well. Even so, the 18mm thick aluminium case looks as smart as ever, and at just 1.58kg it can still give most of its Windows Ultrabook rivals a run for their money. 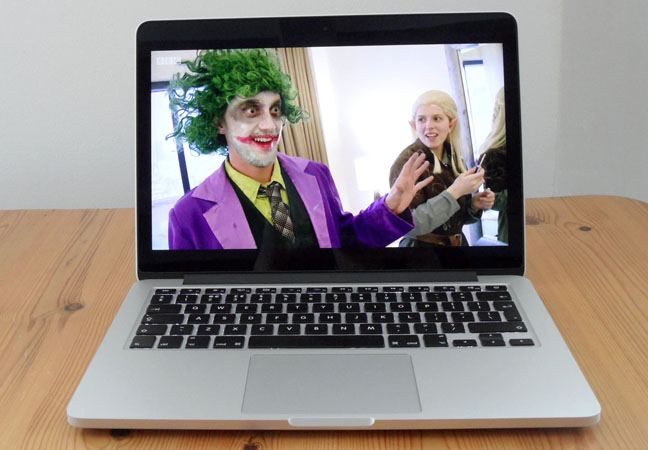 There’s no change to the 2560x1600 resolution of the 13.3-inch MacBook Pro with Retina display (WRD) either, but that resolution is still more than adequate for a screen of this size, and its bright, bold colours remain a treat for the eyes – even if the glossy screen coating is sometimes annoyingly reflective.

The MacBook Pro also remains the best-connected Apple laptop, with two USB 3 ports, two Thunderbolt 2s, plus an HDMI port, headphone jack and SD card slot. Unfortunately, like its predecessor, the new MacBook Pro also comes with its 8GB of memory soldered on to the motherboard.

That's your lot with the ports... alas, no Ethernet these days

If you want to upgrade to the maximum 16GB you’ll have to cough up for an overpriced RAM expansion – £160 at the time of purchase. Apple’s approach to user-upgrades is annoying at the best of times, but seems particularly cynical in a ‘pro’ laptop such as this.

Fortunately, there’s more to the new MacBook Pro than just the fancy trackpad. The key change on the inside is the introduction of Intel’s fifth-generation Broadwell processors. The entry-level model reviewed here costing £999 – the same price as last year – has an Intel 2.7GHz dual-core i5-5257U, along with 8GB of memory, and a modest 128GB solid-state drive.

Still slim enough to fight it out with the Ultrabooks

For £1199 you can double the storage to 256GB, while £1499 will give you 512GB and a 2.9GHz processor as well. A further £170 will allow you to upgrade the processor to a dual-core i7 running at 3.1GHz, but there are no quad-core options available for the 13-inch MacBook Pro, nor any graphics upgrades beyond the Broadwell’s integrated Iris 6100.

I had no difficulty using Apple’s BootCamp to install Windows 8 and run the PCMark 8 benchmarks – although it’s annoying to see that Windows 7 is no longer supported by BootCamp. The results here were almost identical to those of last year’s model, with the 2015 Broadwell MacBook Pro producing scores of 2466 and 2725 in the PCMark 8 Home and Work suites, compared to 2444 and 2812 for the 2014 Haswell model.

The Iris 6100 didn’t provide much improvement in graphics performance either, merely matching last year’s model when running the Mac-native version of Batman: Arkham City. Not surprisingly, running the game at full 2560x1600 resolution reduced it to an unplayable 6fps.