LOOK OUT, Brits – is that a Facebook LASER-GUN drone above us? 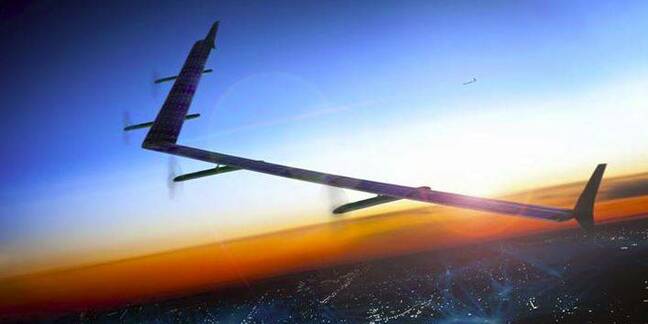 F8 2015 Facebook is still banging on about fleets of solar-powered, laser-firing drones that beam a glimpse of the internet to far-flung corners of the globe.

In a post on his Facebook blog on Thursday, CEO Mark Zuckerberg said one of his social network's unmanned "Aquila" craft has undertaken its first successful test flight. The machine took to the skies in the UK.

The website's cofounder said the drones will eventually be extremely large yet lightweight. The final design calls for a wingspan longer than that of a Boeing 737 – 95ft (29 metres) – while the whole thing weighing as much as a small car.

The solar-powered planes could be up in the air for "months at a time," Zuck says, and will operate at altitudes of 60,000-90,000 feet. In the process, the planes would act sorta like flying cell towers – sending and receiving data signals fired to and from ground stations. It's possible the machines will use infrared lasers to transfer packets of data through the skies, creating a high-altitude communications grid.

Speaking about the project at the F8 developer conference in San Francisco, California, on Thursday, FB chief technology officer Mike Schroepfer said the aim of the program was to develop internet service for remote areas without the massive costs of building towers and laying cable across huge stretches of uninhabited land.

"In dense urban areas it is economically feasible to recoup the massive capital investments telcos have to do to provide internet access," he said.

"As you move to more rural areas of the world, you just can't recoup those losses."

Neither exec gave dates for further tests or deployment, but Schroepfer said Facebook would be releasing more info on the project later this year. ®