VMware has almost certainly increased the prices it charges to partners and customers.

News of the increases is dribbling out after Virtzilla wrote to users and resellers over the last few days.

In this Reddit thread VMware users report price hikes of between one and five per cent.

Blogger and VMware-watcher Aidan Finn on Wednesday wrote he received “an email today from a VMware distributor that informs VMware authorised partners that their prices are going up.”

Finn's posted the image below, depicting the letter: 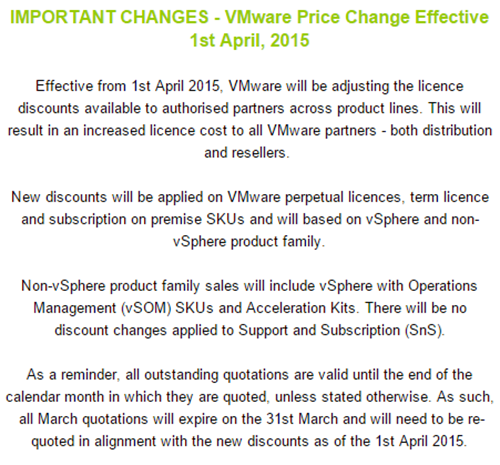 VMware wouldn't confirm or deny the letter or the price rises, but a spokesperson sent us this “general statement on VMware’s pricing policy”, to whit:

”As a normal course of business, VMware regularly reviews pricing for its products and services. We do this as part of our ongoing efforts to ensure that VMware customers receive value significantly in excess of the prices we charge.”

That's not a denial, and with a few sources out there reporting receipt of price rise letters, saying there's no price rise in the wind probably isn't possible.

Whatever VMware's up to, those who've been told prices are rising aren't rabid: folks in the Reddit thread feel that VMware has added a decent lot of new features. Which is a fair argument. vSphere 6.0 is a big step forward, and customers can now also get a free OpenStack distribution from VMware.

Customers have also been warned, in a roundabout way, by the admission that currency and cloudy conversion rates are expected to lop a percentage point or three off Virtzilla's growth in 2015. Listed businesses don't take that kind of thing lying down, time marches on and price rises are to be expected in any phase of the business cycle. ®