The Tears of the Rajas

Ferdinand Mount is a baronet, journalist and conservative politician. The Tears of the Rajas is a history of the mid-period of the British Empire in India, as told through the lives of Mount’s ancestors.

The author begins by telling us the tale of his Aunt Ursie, a wonderful eccentric: “She hung out in residential hotels... tending... to select those where gruesome murders had recently occurred”

Mount’s family were aware that Aunt Ursie had written a family history, which none had bothered to read. This changes after The Sunday Times published an article linking one of David Cameron’s ancestors to a massacre during the Great Indian Mutiny of 1857.

You see, our current prime minister’s mother is the author’s first cousin. The source which The Sunday Times used was none other than Aunt Ursie’s family history, which the author finally reads and is the inspiration for his book. 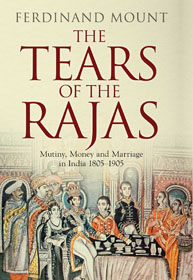 Ferdinand Mount descends from the Low family of Fife, lowland Scots who were typical of the Empire’s administrators during the 19th century CE. The main character of this work is John Low who worked his way through the ranks to a generalship and a knighthood during his half-century stint in India.

Mount takes us through the early days of the British in India, quoting Sir John Kaye: “In the plenitude of our national self love, we encouraged the conviction that Great Britain had conquered Hindoostan by a series of purely defensive measures.”

He goes on to say, “The British Empire in India was the creation of merchants and it… had to operate at a profit”.

The rapacity, double standards and conduct amounting to daylight robbery committed by the East India Company ultimately lead to the Great Mutiny of 1857, but we first meet John Low as a lieutenant putting down a smaller mutiny in Vellore in 1806. Mount points out that ignoring the lessons of Vellore led directly to the Great Mutiny, one of 110 uprisings between 1783-1900.

John Low is first and foremost a soldier and ultimately obeys orders, but he is an intelligent and perceptive individual who questions much of British policy in India. He is not one of those who Mount pillories, “The British establishment has never been shy of rewarding failure”.

The build up to the Great Mutiny is superbly told. Ferdinand Mount weaves family history, official documents and personal correspondence into a compelling tale of cultural divides, ignorance and greed. The English settlers are brought to life in a manner which is rare; their hopes, fears, delusions and disasters are catalogued alongside the traditional examples of British understatement and sangfroid.

Take this example from the correspondence of a magistrate, surrounded and outnumbered: “I never was better in my life than I am now and we are all very jolly and have fun… I’m so glad you have a fellowship (to Oxford)”.

As for the officer who was hit by cannon fire? “Oh, there goes my arm and leg, give me a glass of water.”

The Great Mutiny is well described but resembles colonial wars the world over, the retribution and consequences being strangely familiar. The story rather peters out after 1857 when John Low returns to the UK. His son Robert is involved in the Second Afghan War, but is not at the centre of events as his father was.

The Tears of the Rajas is an excellent work. Ferdinand Mount, although writing about family and the past – favourite subjects of the conservative – is always questioning and never complacent. Although this book may have worked better if had just concentrated on the life of John Low and cut off some forty years earlier, it is still the best that I have read about the British in India during the nineteenth century.