Ian Caldwell is an American novelist and the co-author of the bestseller The Rule of Four, which was released in the wake of The Da Vinci Code and ploughed a similar furrow. So it may not come as a total surprise to discover that his new novel involves ancient manuscripts, religious artefacts and secret societies.

The Fifth Gospel is set in 2004 and is narrated by Alex Andreou, an Orthodox priest who is on a mysterious diplomatic mission to The Vatican. He is the single parent of a young son, Peter. Alex has a brother, Simon, who is an agent of The Secretariat, a kind of Catholic ninja.

The brother’s father had an ambition to reunite Eastern and Western churches by proving the authenticity of the Turin Shroud, but was thwarted when radiocarbon dating conducted during the 1990s had indicated the Shroud to be medieval.

Forward to 2004, an archeologist, Ugo Nogara, is investigating The Diatessaron – an amalgamation of all four gospels. He believes that he has found evidence that the Shroud had been in Edessa (modern Urfa in Eastern Turkey) during the early centuries of the Christian era and had been brought west by crusaders and that the radio carbon dates had erred as they were performed on a later repaired section.

The novel opens with Simon phoning Alex to come quickly. Alex finds Simon bent over the body of the dead archeologist. Alex’s flat is simultaneously burgled, apparently by parties looking to find the secret which Simon and Ugo have uncovered. 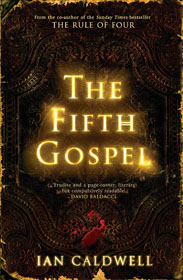 The introduction to the novel is well set out, if a little slow moving, but I guess they don’t party like they used to in St. Peter’s. We are told, “Nothing fans a religious delirium quite like Vatican silence.”

We are drawn into a web of intrigue rather reminiscent of the Cold War cloak-and-dagger yarns, with their east and west, secret codes and double and triple agents. The characters are ciphers; the conspiracy is the book.

“Priests underestimate the appetite of laymen for cheap thrills about Jesus”. I think we disbelieving laymen are less picky where our cheap thrills originate. Simon is picked up for the murder of Ugo and then the novel commits suicide: “The truth that moves the lifeblood of our faith is a thumping impulse towards self destruction.”

Firstly we are treated to some ridiculously homoerotic flashbacks of Simon, the novitiate becoming a bare-knuckle prize fighter to turn street kids towards God: “But when he pulled off his shirt – stripped it off like a skin of glue – I felt my throat tighten, because I knew those muscles. I knew the way they stretched around that backbone like wings.”

Then Alex’s estranged wife turns up and you can almost hear the syrupy strings of a film score building up. At this point I find Mr Caldwell is grasping at clichés and I can no longer take him seriously. I pray for the Nunslinger to enter and wipe out the whole cast, but no such luck; the tale meanders through scriptural minutiae and the wafer-thin characters follow the unfeasible storyline like sheep.

The Fifth Gospel starts with a death and ends in a nativity. This is not an atrociously written book, it is just a bit boring at times and gives rather too much of a nod to the Dan Brown bandwagon. Alas, it is a somewhat underwhelming addition to a sub-genre that only the most hairsplitting of religious pedants and tragic conspiracy theorists are likely to enjoy. ®