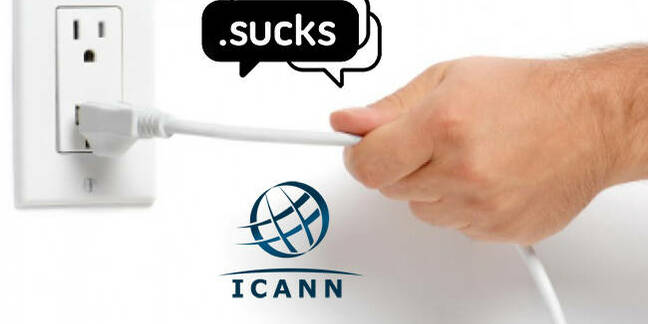 The intellectual property constituency (IPC) of domain overseer ICANN has formally asked the organization to halt the rollout of the controversial .sucks top-level domain, due to start on Monday.

In a letter [PDF] sent from the IPC to ICANN's head of the Global Domains Division, Akram Atallah, the IP lawyers complain that the pricing plans published earlier this month for domains ending in .sucks are "predatory, exploitative and coercive," and claims that they may break ICANN's own rules and the registry's contract with ICANN.

Under the "sunrise" rollout, which dot-sucks registry Vox Populi is obliged to carry out, trademark holders are given first rights to buy domains with their trademarks in. Typically, this costs companies the usual registration fee plus an additional sunrise charge that ranges from $15 to several hundred dollars.

Dot-sucks however intend to charge $2,500 for such names and has also put a list of similar names under a "premium name" program that would see companies have to pay $2,500 per year to get hold of their brand names, even if they don't opt to register it during the special sunrise period. What's more, the company intends to charge ordinary consumers just $9.95 for a dot-sucks domain.

Unsurprisingly, this approach has not pleased the IP lawyers:

Vox Populi will charge trademark owners over 250 times more than what it will charge most ordinary consumers for domain names upon the launch of general availability.

And while the IPC notes that ICANN "has previously taken the position that it does not regulate pricing and that compliance has refused to take action based on a pricing issue," it feels that if the pricing rules are allowed to go ahead, it will make a mockery of ICANN's "rights protection mechanisms," and may even break the contract that Vox Populi shares with ICANN.

The letter then uses a choice array of words and phrases to describe the pricing plan, including: shakedown scheme; exorbitant sums; detrimental to brand owners; predatory 'get rich quick' scheme; conspire with an (alleged) third party to “subsidize” a complaint site should brand owners fail to cooperate.

On the other side, Vox Populi's CEO told us earlier this month that the pricing was an attempt to strike a balance between allowing trademark holders access to their names and keeping with the original intent of the internet extension, which was first proposed by consumer advocate Ralph Nader back in 2000. Nader proposed that companies would not be allowed to own domains with their names under the dot-sucks registry, which would be used to "to facilitate criticism of a firm or organization."

Despite the unusual nature of Vox Populi's approach, it seems unlikely ICANN will halt its rollout with one business day's notice, which raises the possibility that one of the first trademarked names to go may be 'ICANN.sucks'.

(Only joking, ICANN has given itself special all-encompassing rights in its own name across the entire internet.) ®