To BALDLY GO where few have gone before: NASA 'naut twin to spend YEAR IN SPAACE

Study will pave the way for mission to Mars

The pair will tough out the marathon stretch so NASA can understand more about the long-term effects of life in space on the human body.

On Friday, the astronauts lifted off from Baikonur Cosmodrome in Kazakhstan atop a Soyuz TMA-16M rocket to head up to the ISS. NASA astronaut Scott Kelly and Russian Federal Space Agency (Roscosmos) cosmonaut Mikhail Kornienko are the two long-timers on the mission; cosmonaut Gennady Padalka will be staying there for the standard six-month stint.

"Scott Kelly’s mission is critical to advancing the administration's plan to send humans on a journey to Mars," said NASA Administrator Charles Bolden.

Kelly is ideal for the year-long experiment: he has an identical twin. His brother Mark, who is himself a retired astronaut, will act as a control – a baseline – for Scott's medical tests. 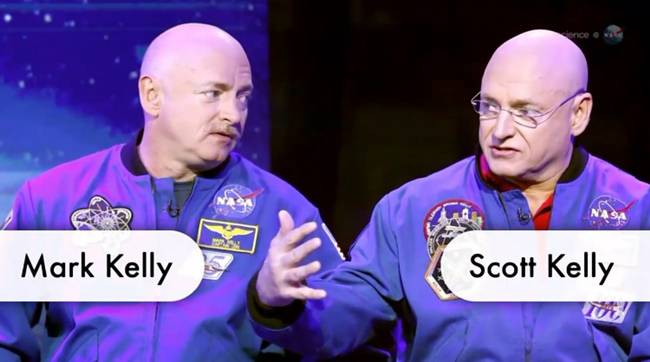 They're our rocket men

For example, both men are going to be injected with a flu vaccine at the same time, and then their immune responses will be tested to work out how effective vaccination is in low gravity. Their respective gut bacteria will also be sampled, as will the rate of degradation in their telomeres – the nucleotide sequences that cap off human chromosomes.

These tests, along with a battery of physical and behavioral modeling, will allow NASA to get a much better idea of the risks associated with getting humans to Mars. Using today's technology, it would take about nine months to safely reach the Red Planet, and the same amount of time to get back, plus about two to four weeks on the alien world.

There is already a body of work on how to protect astronauts on the trip from external threats, such as solar radiation, but the effects of going so long without gravity has some people in the space community worried.

We already know that astronauts need to exercise for hours each day just to maintain their muscle and bone density. But zero-G also adversely affects eyesight, and brain function may suffer too. NASA is committed to bring back any explorers it sends out in a fit and healthy condition, and the study of the twins is going to be key to that.

The mission, the 43rd to the ISS, also has other science goals. The crew will use new equipment to study the effects of meteors entering Earth's atmosphere, and will test a new flexible material that expands and contracts like human muscle tissue.

The three crew members are expected to arrive at the station at 2136 Pacific Time (0436am UTC) and will join the three 'nauts on board. ®