Works well on tarmac – just remember to keep it there

Vulture at the Wheel This wasn't the car I was expecting. If I’d been paying attention I would have known that the new twin-turbo, 9-speed auto, 4WD 1.6L diesel turbo CR-V isn’t on the UK press fleet yet. What rolled up outside Vulture Central was the decidedly white-bread 2WD i-DTEC single-turbo 1.6L diesel. 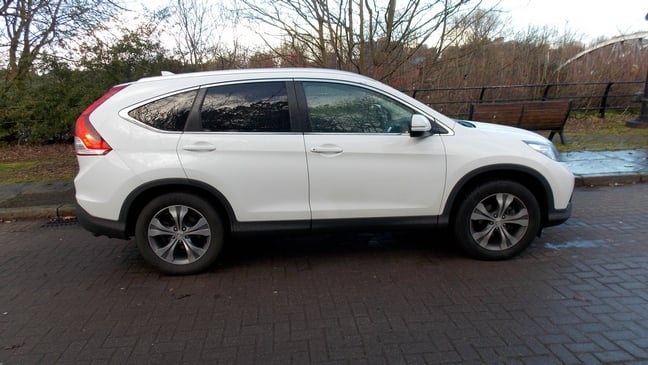 Larger? Make no mistake, the CR-V is a big old bus. At over 4.5m in length it’s longer than the likes of the Nissan Qashqai or VW’s Tiguan. Wider too. Load it up to the window line with the rear seats elevated and you will have shovelled in 589 litres of stuff. Drop the rear seats and the luggage capacity jumps to 1,669l. 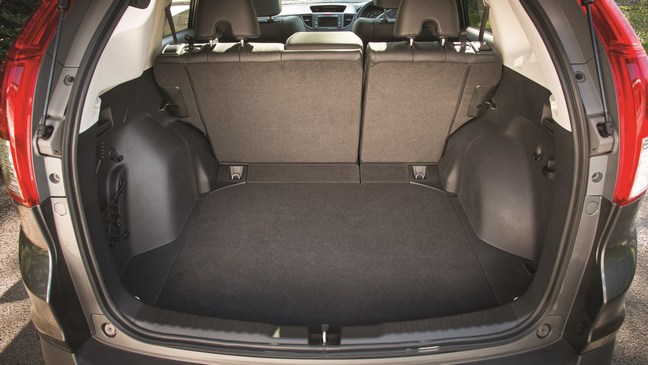 I’m not entirely solid on the exterior of the CR-V. Considering it was designed with the European rather than North American market in mind it still looks decidedly transatlantic to me, especially the nose. The rising waistline and thick D-pillars don’t do rear visibility any favours either.

At least it’s distinctive and in this world of bland (Hyundai ix35, VW Tiguan) and ugly (Audi Q5, Mazda CX-5) SUVs that’s better than a slap in the chops with a wet fish. 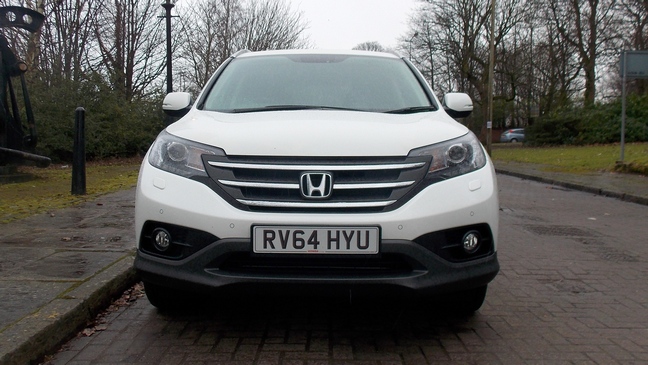 For a vehicle designed for Europe the nose of the CR-V is very USA!.

The abundance of space isn’t just confined to luggage. The CR-V will carry five six-foot adults in roomy comfort for hour after hour. It really is an impressively commodious and comfortable vehicle. It will it carry you, your family and your stuff around quite happily – and it will do economically.

That’s thanks to the 1.6L turbo-diesel under the CR-V’s bonnet, which frankly is a bit of a peach from a company that hadn't made a diesel engine for a passenger car until 2003. 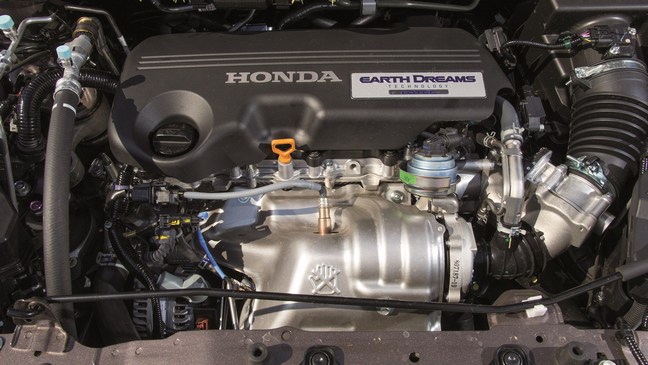 Honda's Earth Dreams 1.6L turbo is a peach of an engine

Refined, tractable and wholly free of cold-start rattle, the 120PS Earth Dreams (I kid you not, that is what the engine series is called) unit will haul the CR-V to 60mph in 11.2 seconds and on to a top speed of 113mph.

Now I grant you that doesn't make the CR-V a sports car – more UV than a SUV – but this is an engine with a combined cycle consumption of 62.8mpg and CO2 emissions of 119g/km. That’s really not bad for a motor fitted to something that weighs over 1540kg and has the drag coefficient of a small cottage. 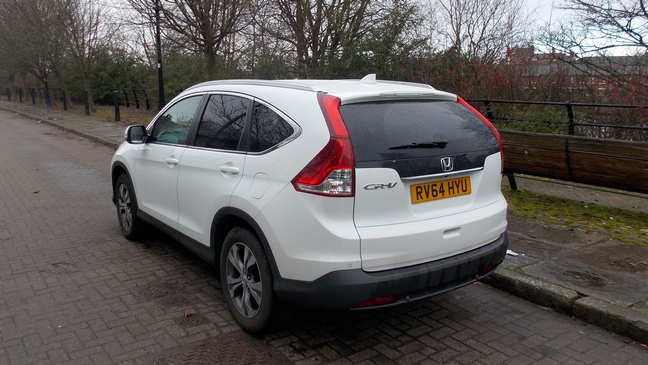 It is an impressively easy to car to drive. With 300Nm (221lb-ft) of torque available from 2,000rpm you can bimble around in the wrong gear all the livelong day. Even in fifth the CR-V pulled away from near walking pace without any fuss.

Get it out onto the motorway, stick the gearbox into the very long sixth and you can roll down the road near the legal limit at barely more than tick-over. 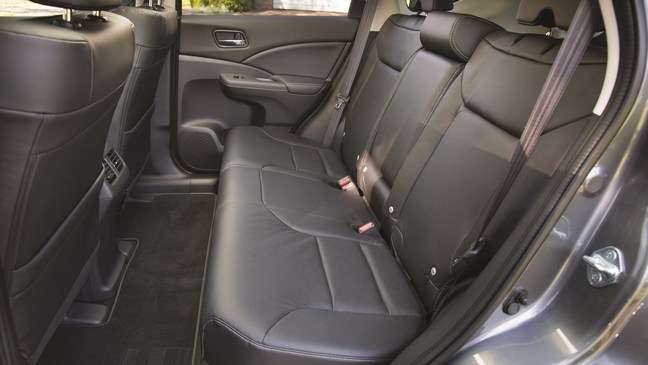 Masses of rear legroom for those in the back.

It’s a not a bad car to drive with a bit of vim either. Granted, it feels more softly sprung than some of the competition but the flipside of that coin is that the ride is impressively smooth even over the potholed atrocities we Brits have the cheek to call main roads.

Pushed hard, the CR-V can get a bit wallowy at times and can struggle for grip if you get your cornering wrong and hop on the power too soon. If you apply a bit of common sense you can still hustle it down a twisty road and not need a fresh change of undergarments when you reach your destination. 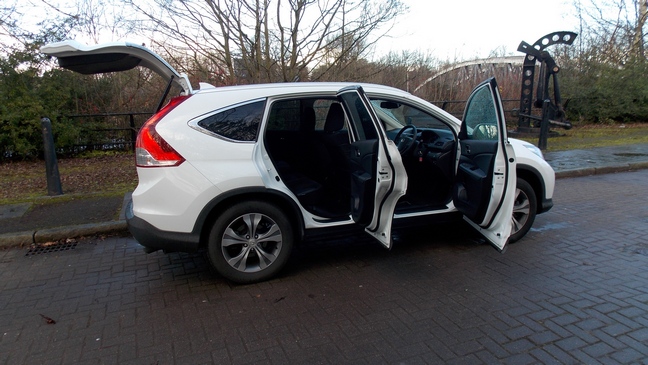 Ease of access is not a problem with the CR-V

The cabin is a pretty nice place to spend your time even it is all a bit black and plasticy for my taste. Everything falls to hand (and foot) nicely and the six-speed manual gearbox is an object lesson in design and execution.

The driving position is a nice compromise between the excessive SUV-elevation you get in many cars of this ilk (I, for one, only want to feel like I’m driving a van when I am actually driving one) and the height you sit at in an Astra or a Golf. 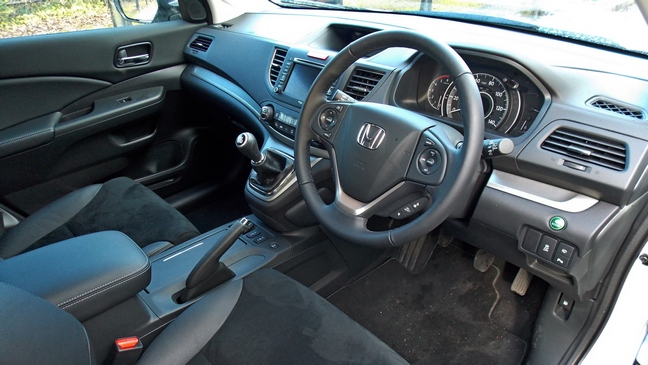 The CRV's cabin is well equipped and very comfortable but there is a lot of grey plastic about.

I’d not want to live with the velour-like upholstery of my test car, to be honest, but that’s a small niggle and one easily changed when ticking through the spec list.

This being 2015, the CR-V has not one but two displays in the centre console. The 5-inch touch-screen i-MID (that’s Multi Informational Display) does the communications, ICE and navigation work while a smaller screen above it shows you vehicle related stuff. 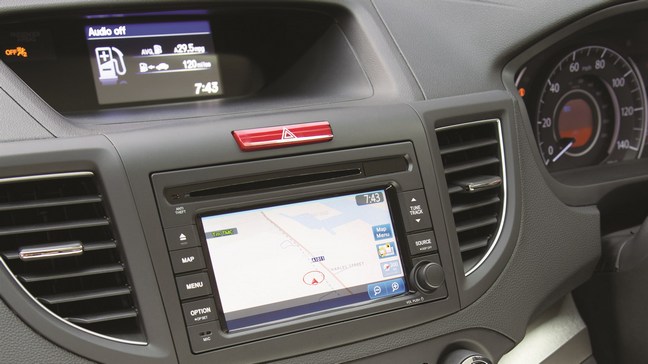 Not one but two displays in the CR-V's centre console. Bottom one is for touch, top one for info.

I’m not a huge fan of touchscreens in cars because I find them too distracting, but the CR-V’s does the job well enough and doesn't require excessive stretch.

To help eke out the maximum range the CR-V has a couple of eco-assistant features. The big green ECON button just reins in the air conditioning; it doesn't actually affect the drive train one iota. More useful is what Honda calls ECO Assist. 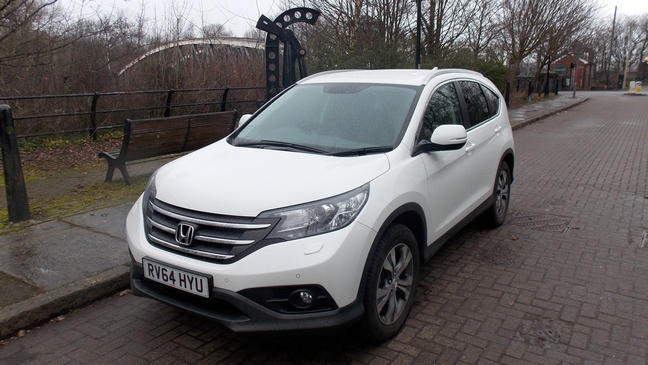 Eco Assist is a visual driver aid. I usually hate these things with a passion but by being a little less intrusive than many similar affairs, the CR-V’s proved to be something I could live with.

The system takes the form of two illuminated bars on each side of the speedometer. Drive normally and they glow white. The more economically you drive, the greener they glow. 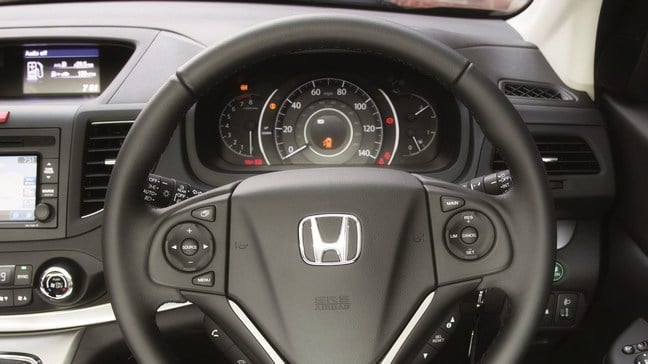 CR-V's eco guide is more about gentle persuasion than badgering

Gentle persuasion is the name of the game here rather than eco-badgering. It's all the better for it, too. I found myself trying to keep in the green almost subconsciously, which I suspect is the point of the thing.

Is the CR-V actually as economical as Honda would have us believe? Driving around central Manchester for a day I averaged 44mpg. On a run along the A55 to North Wales and back, that jumped to 61mpg. My average across a week and 400 miles? 57mpg. I was more than happy with that.

Big, economical and easy to live with. If you want a large five-door hatch to get a lot of stuff and people from A to B efficiently and comfortably the Honda CR-V has a lot to recommend it. If you really need to go off-road then you’ll be wanting the more expensive 4WD version, but let’s face it: unless you live on the side of a mountain, you probably don’t. So the 2WD version will do you just fine. ®