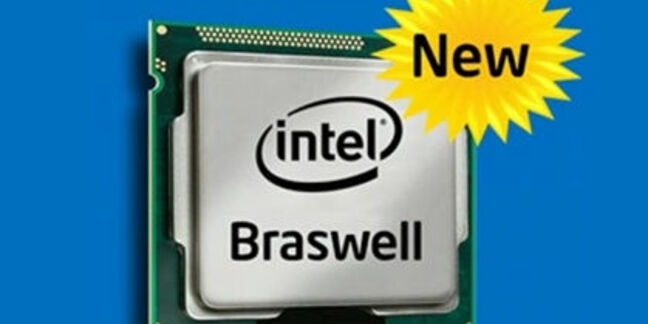 Without much fanfare, details have begun to emerge about Intel's latest line of Atom system-on-chips for low-end desktop PCs, and laptops.

CPU World reports that Intel will offer four new Atom products based on its 14-nanometer "Braswell" process, to be marketed under the Celeron and Pentium brands.

Each will be based on two or more 64-bit "Airmont" CPU cores – which is Intel's 14nm shrink of its Silvermont microarchitecture for low-power Atom chips – coupled with a DDR3-1600 memory controller, an unspecified eighth-generation Intel GPU, and I/O and chipset logic within the same package.

At the bottom end of the batch, the Celeron N3000 and N3050 each come with two CPU cores – and because Silvermont doesn't support Hyper-threading, each core can only handle a single processing thread.

The other two entries in the new bunch are the midrange Celeron N3150 and the heavyweight of the set (relatively speaking), the Pentium N3700. Each delivers four CPU cores at a base clock speed of 1.6GHz and a TDP of 6W.

All three Celeron-branded SoCs are reportedly priced at $107 apiece, while the Pentium N3700 will go for $161 apiece.

Intel is currently expected to debut Goldmont, the successor to Silvermont and a brand-new Atom microarchitecture for the 14nm process, by the end of 2015. ®

Boffins build the smallest transistor, controlled by an atom

It has potential, but don't expect anything useful too soon