Maxwell is most often pictured holding a colour wheel, a disk of card with sections of different colours that can be spun to create white. It seems obvious now, but at the time this was a significant breakthrough, and various versions of the disk are scattered around the room.

We can also see his first presented paper, on the rendering of mathematically correct ovals, written in his own hand. This was presented to the Royal Society of Edinburgh in 1846, but not by Maxwell who (at 14) was considered too young to be standing in front of such an august audience. 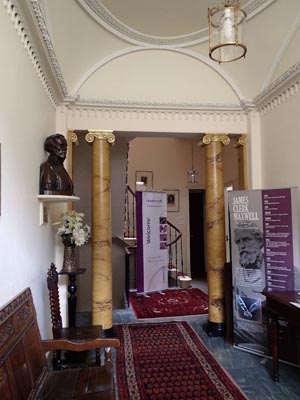 He was 26 when he proved, mathematically, that the rings of Saturn could be neither solid nor made of liquid. The only form that would allow stable rotation was a collection of small rocks, which from Earth assumed the form of a solid ring.

Yet the breakthrough for which he is best known is linking light to electromagnetism, and we can see his presentation on that subject too. The breakthrough was his measurement of the speed of electromagnetism, which came too close to the speed of light to be coincidental, leading to the inevitable conclusion that the two things were one and the same.

From there we have the electromagnetic spectrum, and radio waves, and everything else. Maxwell fits squarely between Sir Isaac Newton and Albert Einstein, and deserves to be as well known as either of them.

It would be years before the implications of his discovery would be understood, and he spent the next few decades refining it. It was more than a century before the Voyager spacecraft confirmed his proof about the rings of Saturn, and we're still sorting out whether his electromagnetic phenomena are particles or waves (spoiler: they're both), so this was a man well ahead of his time.

But mathematicians can do that: while physicists have to spend billions building colliders, and chemists obtain rare samples to feed their alchemy, the mathematician can predict how things have to be. Maxwell was a poet, and as one of his many works explains:

Of the Philosophic Spirit

Richly may my son inherit;

As for Poetry, inter it

With the myths of other days.

Cut the thing entirely, lest yon

College Don should put the question,

Why not stick to what you're best on?

Not that he had any sons, or daughters. Denied permission to marry his first cousin he ended up with the boss's (the principal's) daughter while at Marischal College, Aberdeen. Katherine Dewar was, by all accounts, a devoted wife who helped him with his experiments, but the couple didn't reproduce.

Maxwell himself was almost certainly born in the upstairs bedroom at 14 India Street, now known as the "Motorola Room". The room is largely devoid of furniture now but would have been the master bedroom when the house was occupied by John Clerk Maxwell and his wife.

In keeping with the fashion of the time the bedroom has double doors into an upstairs drawing room, now available for scientific seminars and the like. When guests were expected the bed could be packed away and the doors, which are decorated with eagles to celebrate the recent victory at Waterloo, would be opened to create a single room.

The next floor isn't open to visitors as it's rented to an HR outsourcing company. The stairs are flanked with engravings of the scientists onto whose shoulders Maxwell climbed, as this BBC documentary notes. 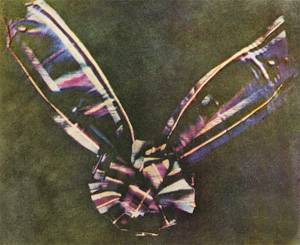 Beyond the house itself there is the walking tour, which doesn't start at his place of birth but at St John's Church where the family spent their Sunday afternoons. Behind the church there's a small parade of socially idealistic shops and a cheerful rustic cafe supplying victuals to those tracing the route.

The James Clerk Maxwell Foundation provides a PDF with a map and description of the three-mile walk, which includes various sites associated with the great man. There is also a smartphone app, which comes with a quiz and directions, but as the directions seemed inadequate and the quiz answers didn't match information on the foundation's own web site, we decided to stick with a print out.

Next page: 'Dafty' strikes back
Page: