That route took us past 14 India Street and on to 31 Herriot Row, from where James Clerk Maxwell's aunt sent him off to school dressed as a country bumpkin, much to the amusement of the other pupils who wasted no time in labelling him "dafty" - which doesn't seem to have bothered him as much as it might have. The last laugh goes to James, as in 2006 the school spent £4.6m building the impressive James Clerk Maxwell Science Centre, where those who can afford it can get a decent education.

Other than that additional building the school remains surprisingly unchanged, from the front at least, which makes sense given its continuing mission to educate the gentry of Scotland's capital city. 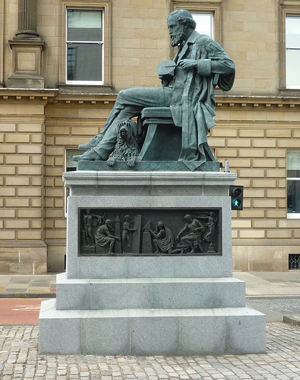 From the school it's a bit of a climb back to Heriot Row, but fortunately there's Clerk's Bar in the way. The pub opened 20 years after Maxwell died, and it's spelled differently, but the call of a decent pint is enough to smooth over a few historical anomalies.

From there we continue up to George Street, where a statue of the great man stands (or, rather, sits) looking down the road. Clasped in his hands is the colour wheel that could be spun to demonstrate how white light is a combination of everything else, while beneath him sits Toby – the dog with whom Maxwell shared so many of his ideas before testing them on humans.

The statue is impressive, though his equations are relegated to a small plate on the back, and the friezes that adorn the sides are a little impenetrable without footnotes. 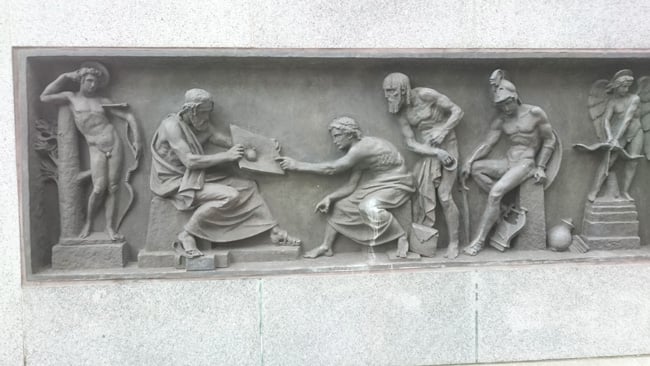 That's Apollo on the left, representing light. He's been shot by Eros, who's representing gravity, which is why he's smaller than the others (gravity being the weakest force, though still able to influence light). The chap holding the rubber sheet is a suspiciously Greek-looking Einstein showing off his theory of relativity, while the beggar represents the end of classical science and the warrior relaxing as the battle is done.

Einstein might not have favoured the toga in real life but he was a big fan of James Clerk Maxwell. According to the man himself: "The special theory of relativity owes its origins to Maxwell's equations of the electromagnetic field."

Visiting the house is a great experience, though perhaps for the more dedicated fan (or group) who can make forward arrangements. To see the notebooks and tools used by the man himself is an inspiration, and scientific groups in Edinburgh should certainly consider the seminar room for meetings or talks.

The walking tour is fun, taking one through Edinburgh's (New Town) residential areas which might not be part of the usual tourist trail. The Royal Society of Edinburgh's impressive home might now be a Lakeland (the society has moved up the road), but walking around the route one gets a feel for how the city once was, and how James Clerk Maxwell would have known it.

If you’ve an hour or two to kill in Edinburgh then take the walking tour, and if you're a physicist who wants to know more about how physics came to be then get a couple of similarly minded mates together and make an appointment to see the house where so much of it started. ®

14 India Street is a 20-minute walk from Edinburgh Waverley station. West along Princes Street then turn right onto Castle Street crossing George Street and Queen Street to turn left onto Heriot Row and then India Street is on the right. A stone plaque marks the wall of number 14.

The walking tour starts at St John's Church, which can be found by emerging from Edinburgh Waverley station and taking a left to walk east along Princes Street for just under a mile, when the church will be visible on the left.

There is no charge for viewing the house, but an appointment must be made with the James Clerk Maxwell Foundation.