UK.gov: We want Britannia's mobe-enabled cars to rule the roads

Turner's view is that the 5.9GHz 802.11p standard is key for automated vehicles. This isn’t a cellular system: it’s designed for car-to-car and car-to-infrastructure, but can be used as a relay so that information could be communicated through intermediate cars. High-speed setting-up of a connection would allow one car to connect to another, send a pack of data and then disconnect from it as the two vehicles passed one another on a dual carriageway.

While this is impressive, it’s designed for minute quantities of data. Things like “I’m braking hard”, or “deceptive bends ahead”. The 10MHz of bandwidth is nothing like adequate for transferring data from a camera, and a modern Range Rover has five cameras on it.

Even with only small amounts of data per car, there is too little spectrum to cope with large numbers of cars in a traffic jam. It’s peer-to-peer, but not a full mesh. Cars can drop a message off at a lamppost and have it picked up by the next car, but it is not envisaged that there will be the redundancy and acknowledgement you would get in a traditional mesh network. 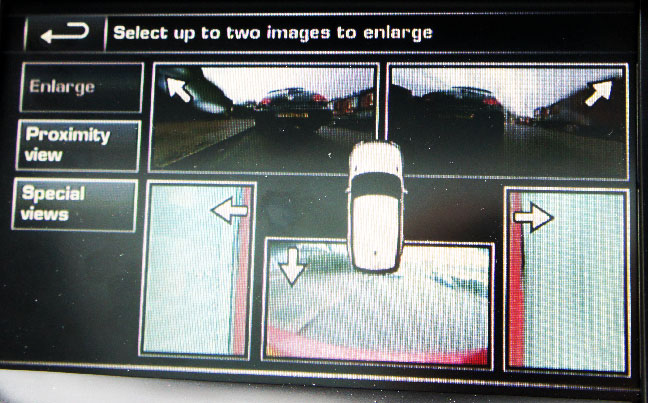 The Range Rover can show views from five cameras

The standard for 802.11p is well-intentioned; you can see how it might reduce slow-speed shunts at traffic jams or multi-car collisions, and be used to trigger engine stopping for hold-ups. However, Nick Hunn of Wifore Consulting thinks that 802.11p has spent so long in the development stage – over 10 years – that it’s missed the boat.

“It was designed at a time when the view was you’d get information about things like ice on the road, which would come from the transport agency,” he said. “It was at a time when 802.11 was 2MB per second and it was never envisaged that there would be anything like the amount of data coming from cars as there is now.”

The spectrum allocation – however pitiful from a bandwidth point of view – is nevertheless impressive when it comes to the international co-operation involved. It even includes the Americans, but there is no agreement beyond the radio protocols; no set of parameters or consensus on what information would be exchanged.

There is a massive Big Data opportunity as cars put out all the information on the OBDII port into the world, but it would need a far better architecture and will need some other form of radio to do what the world needs.

One option would be to use cellular but that demands coverage - and, as much as the government and mobile phone networks will tell you the UK has great coverage, this is not the day-to-day experience of many consumers. At the SMMT event Professor Rahim Tafazolli from the University of Surrey talked about 5G offering seven nines (99.99999%) reliability and having 100MHz of bandwidth due to carrier aggregation, but with a lot of that over 6GHz.

This translates into a lot of cell towers, as even if the data is transferred through pico and femtocells in a heterogeneous network, you will still need umbrella cells on towers to control them. That would need planning reform, and it doesn’t sound like that’s going to happen.