Jason Bourne wouldn't stand for this. Codename leaks for two OS updates on heels of Win10 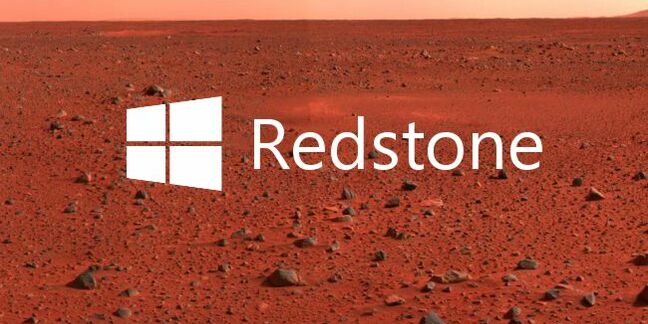 Windows 10 isn't even fully baked yet, but reports have it that Microsoft is already planning its next OS release, which will arrive after Windows 10 ships later this year.

Neowin was the first to leak that a new Windows release for next year, codenamed "Redstone," is in the works, and prolific Redmond-watcher Mary Jo Foley later said her own sources confirmed the moniker.

Now it looks like Redstone might actually be a blanket name for not one but two separate OS releases, one targeted for June 2016 and the other to arrive in October of that year.

Similarly, Foley's sources now claim that "Threshold" – the early codename attached to Windows 10 – will also apply to two separate releases. The first will be the Windows 10 launch this summer, while the second will come in the form of a major update to be released in the fall.

Four major Windows milestones in two years would certainly mean Microsoft is following through on its promise to speed up its release cadence. Such a schedule would also see Windows development mirroring that of Linux distributions such as Fedora and Ubuntu, which issue new releases semiannually.

Just what Redstone will bring, meanwhile, isn't known. Most sources seem to agree that it won't be Windows 11 – and Foley speculates that Windows 10 might be the last Microsoft OS to receive a version number at all, as the software giant tries to push customers toward a "Windows-as-a-service" model.

More likely it will be a major stability and features upgrade akin to a Service Pack (even if Redmond doesn't call it one). It's likely that Microsoft is scaling back some of its more ambitious goals for Windows 10 as its general-availability window approaches, with some (as yet unknown) features being pushed back to Redstone.

About all we do know for sure is that Redstone is also the name of an energy-generating substance in the construction game Minecraft – so it looks like Microsoft is already getting some returns on its $2.5bn gobble of Minecraft-maker Mojang, after all.

One interesting tidbit that's coming out of all of this Redstone talk, though, is word that Microsoft plans to keep its Windows Insider program around past the Windows 10 launch and straight through the Redstone development cycle – and possibly beyond.

That means testers who are willing to band on Redmond's future OS releases for free will get an early look at new features to arrive in Redstone and will even have the opportunity to give feedback before they ship. ®