Embarcadero has released RAD Studio XE8, including Delphi and C++ Builder, with a slew of new features including a 64-bit compiler for Apple’s iOS and support for iOS Universal Apps, including 32-bit and 64-bit in a single binary.

Apple requires this for all new iOS apps uploaded to the App Store, so users of earlier versions of Embarcadero’s cross-platform suite will be keen to upgrade.

They will be used to a relentless upgrade cycle. RAD Studio XE5 is just 18 months old, which means we have had a new RAD Studio every six months.

RAD Studio is what became of Delphi and C++ Builder, Windows development tools which achieved what Microsoft never quite got with Visual Basic or Visual C++: rapid component-based coding with a visual designer and high-performance native code compilation.

Visual Basic had one and Visual C++ the other, but Borland delivered both. The language is Object Pascal, and the architect of Delphi was Anders Hejlsberg, who went to Microsoft to invent C#. C++ Builder uses that same RAD frameworks, but with the C++ language. 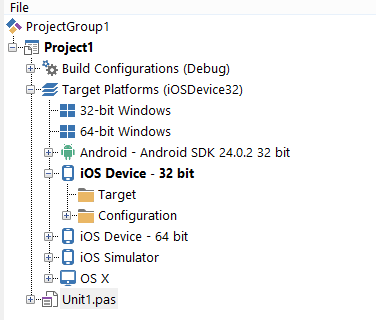 In April 2013, Embarcadero took the tools cross-platform with the release of XE4, which targeted Windows, iOS and Mac via a new cross-platform framework called FireMonkey. This was extended to Android in XE5.

Visual controls in FireMonkey are primarily drawn by the framework, which is good for cross-platform consistency but bad for native appearance. However, recent versions let you set a ControlType property to “Platform” for some controls, in which case you get a native control on iOS only (this property is ignored on Mac, Android and Windows).

RAD Studio XE8 includes numerous new features. FireMonkey is enhanced with a Lollipop style for Android and a WebBrowser control for Mac and Windows, among other changes.

There is also support for proximity sensing on iOS, Android and OS X, using beacon technology, one of several features targeting IoT (the Internet of Things). The Windows-only IDE now includes a Package Manager called GetIt, for easy download of add-on components from Embarcadero.

In January this year Embarcadero acquired Castalia and Usertility from TwoDesk Software.

Castalia adds features to the code editor, including enhanced refactoring, code navigation and code analysis, while Usertility is an app usage tracker that sends data back to Embarcadero’s servers for developer analytics. Both utilities are now integrated into RAD Studio XE8.

Integrated unit testing has been added to the IDE, using the DUnitX framework.

There is a full list of what is new here, but one thing not mentioned is Windows 10 support. Windows 10 introduces a new universal app type based on Windows Runtime (WinRT, also known as Metro) but now integrated with the Windows desktop, which runs on Windows Phone as well as PCs. Will RAD Studio support it?

Next page: No Metro here
Page: