Alien world has enough of the stuff for explorers to exploit

Pic Those terraformers with a dream of one day seeing a blue or even green Mars could be in luck. The Mars Reconnaissance Orbiter has found dusty glaciers encircling the Red Planet that could water Martian gardens for generations to come.

Boffins at the Niels Bohr Institute at the University of Copenhagen used radar measurements from the orbiting probe to analyze what were assumed to be glaciers covered in a thick layer of Martian dust. They could have been formed from frozen carbon dioxide, or even mud, but the latest radar images show they are packed full of water.

"We have calculated that the ice in the glaciers is equivalent to over 150 billion cubic metres of ice," said Nanna Bjørnholt Karlsson at the university's Centre for Ice and Climate.

(Karlsson reckons there's enough frozen water in the glaciers to "cover the entire surface of Mars with 1.1 metres of ice." However, 150 billion cubic metres of ice divided by the planet's 55.91 million sq mile surface area is more like 1.036mm of ice all over the alien world. If our boffin means 150 x 1012 cubic metres, then the thickness would be 1.036 metres.)

Liquid water can't exist on Mars under current conditions, but these water glaciers appear to have survived thanks to the thick layer of dust protects them. 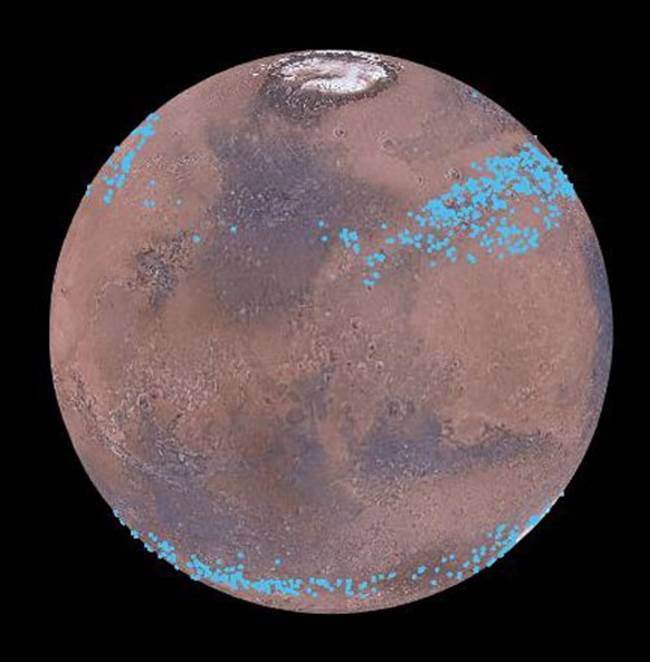 Place a manned mission here ... where the hidden glaciers lie on Mars

"We have looked at radar measurements spanning ten years back in time to see how thick the ice is and how it behaves. A glacier is after all a big chunk of ice and it flows and gets a form that tells us something about how soft it is. We then compared this with how glaciers on Earth behave and from that we have been able to make models for the ice flow," said postdoctoral candidate Nanna Bjørnholt Karlsson.

The findings, to be published in the next issue of the journal Geophysical Research Letters, shows that bands of these water glaciers encircle the northern and southern hemispheres of Mars. Any mission landing on the glaciers should be able to drill down below the layer of dust covering them and harvest the water.

That's going to be crucial if humankind is going to establish an outpost on Mars. While the water itself is unlikely to be potable without extensive filtering and processing, it could be cracked into useful hydrogen and oxygen and would mean the visitors wouldn’t need to carry so many supplies or even fuel for the return trip. ®