Perytons are from Earth, Fast Radio Bursts are from way beyond Venus

Boffins' lunches have been fingered as the source of a long-standing mystery: the peryton, which clouded discussions of the origin of Fast Radio Bursts (FRBs).

Perytons have some similarities to FRBs (such as signal dispersion), but scientists were always fairly certain that their origin was terrestrial. At Parkes, for example, a peryton burst would arrive at all 13 of the telescope's beams – in other words, it was an all-sky event – while an FRB is localised to just one part of the sky.

“Fairly certain” isn't good enough, though, since unexplained perytons left room for the argument that FRBs weren't astronomical signals at all, but Earth-bound.

Swinburne University of Technology's Emily Petroff, who last year spotted the first as-it-happened FRB, has worked with an international group of collaborators to nail down at least one peryton source: microwave ovens.

In a paper to be published in the Monthly Notices of the Royal Astronomical Society and available on Arxiv here, Petroff and 14 others nailed down the characteristics of perytons that suggest they come from microwave ovens.

As well as the strong indication that they're terrestrial in origin, the researchers noticed that perytons were clustered around lunchtime, whereas “the FRB distribution in time of day is consistent with a random distribution”. 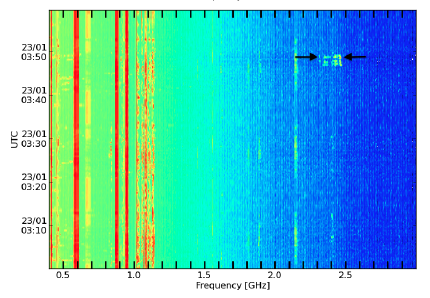 What a microwave oven peryton looks like at the Parkes telescope. Image: Emily Petroff et al

While microwaves are supposed to be sealed against escaping radiation, the research also suggests human impatience lets enough noise escape to be detected: people open the doors as soon as the timer hits zero, but while the power source – the magnetron – is still in its shut-down phase.

“Radio emission escaping from microwave ovens during the magnetron shut-down phase neatly explain all of the observed properties of the peryton signals,” the paper says.

With that mystery cleared up, boffins can get back to the main game, trying to find out whether FRBs are caused by events like mergers between objects like white dwarfs or neutron stars, neutron star collapses, or something stranger.

Astrophysicist Katie Mack of Melbourne University has a discussion of the paper on her Facebook page. ®