Philae lander to come alive soon, says ESA, but has no magnetic field to contend with

Philae hitched a ride to 67P aboard the Rosetta probe and descended to the comet last year, but landed in a crack where its solar panels could not see the Sun. Once its batteries reached a certain level it therefore hibernated. The ESA tried to wake the lander last month, without success, but Ulamec feels 67P is now receiving enough sunlight that the craft's innards should warm beyond -45C, the point at which it starts to do things other than self-preservation. With a little extra sunlight, it's expected the lander may even gather enough energy to fire up its radios and start doing science.

If that happens, one of the things it won't need to look for is a magnetic core, because the lander's bounces across the comet's surface have shown it doesn't have one.

Philae touched down on 67P four times, with the last seeing it come to a halt. Those bounces now turn out to have been useful, because it gave mission scientists more chances to measure 67P's magnetic field at different altitudes. That there was no difference in the field's strength at different altitudes or locations. Both Philae and Rosetta carry magnetometers so there's a fair bit of data to work with. 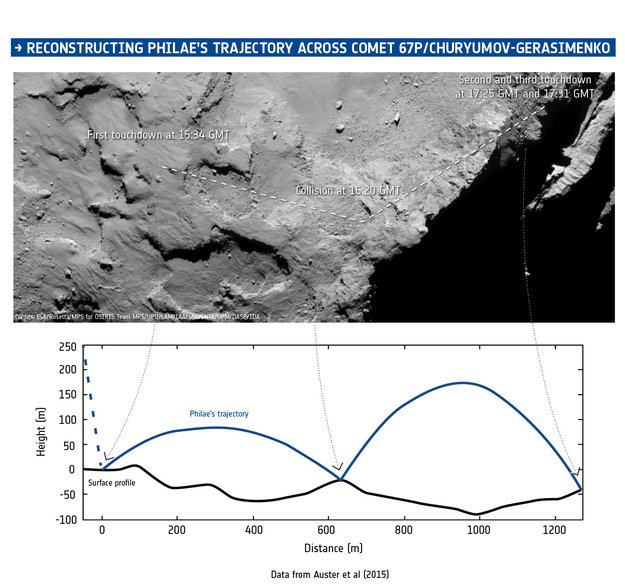 The Philae lander's trajectory across and around Comet 67P

This matters because if 67P has no magnetic field it probably doesn't have an iron core, or much iron at all. That's not good news for the theory suggesting that magnetised particles attracted others, clumped together and did so often enough that they eventually formed an object with enough gravity to attract more matter. Without much magnetic material on 67P, that theory of comet formation is less – ahem – attractive. ®