Want to go green like Apple, but don't have billions in the bank? 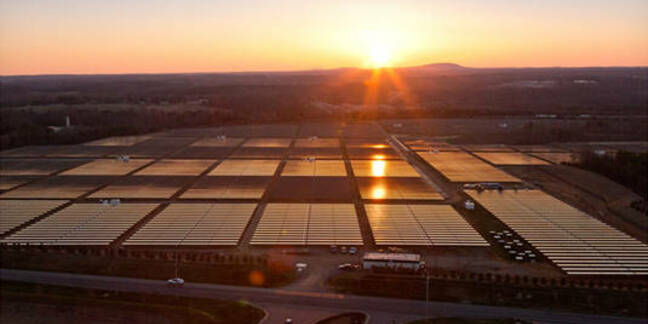 Going Green: Strategy (Part 1) How much energy is required to power the ever-expanding online world? With data centres the factories of the 21st Century, this may be a conundrum high on the environmentalist’s agenda, but what about those building the new Satanic mills?

Last year, Greenpeace estimated that the aggregate electricity demand of the cloud (including data centres and networks, but not devices) in 2011 was 684 billion kWh, meaning that if the cloud were a country, it would rank sixth in the world in terms of its consumption.

Given this scale, regulators have taken an interest. A code of conduct on data centre energy efficiency published earlier this year by the European Commission’s Institute for Energy outlines 155 recommendations for making data centres more efficient.

To date, though, this move has failed to extend beyond guidelines, while participant take-up has been small.

For those running data centres, electricity consumption relating to powering and cooling servers has been calculated at about a third of the cost of running a data centre over its lifetime.

With oil prices at a six-year low that figure could fall, as utilities pass on lower prices in the wholesale market (where they buy oil to burn and turn into electricity) in the form of lower customer power bills.

However, that’s a short-term policy. What happens if and when oil prices rebound? Last year’s Greenpeace report chastised firms for choosing how to power their infrastructure based solely on the lowest electricity prices, without consideration for the impact of their growing electricity footprints.

OK, so you’re not responsible for your company’s quarterly utility bill or overly bothered by what Greenpeace or the EC thinks. Other factors are at play, however. More public firms have made carbon-neutral pledges to their customers, promising to draw on more sources of renewable energy to offset their consumption of electricity generated using fossil fuels such as oil and coal.

The drive to build a “greener” internet has gathered pace in the web tier, as leading data centre operators have turned to renewable energy to meet their burgeoning power needs. So far this year, Apple has announced plans to convert a former sapphire factory in Arizona into a $2bn data centre powered almost entirely by solar power, with a further $2bn on centres in Ireland and Denmark using renewable energy.

Google is turning to wind power after the giant signed a 10-year agreement with Dutch power company Eneco in November 2013 to buy the entire output of a new wind farm to power a €600m data centre, currently under construction at Eemshaven in the Netherlands.

This is the third such power purchase agreement Google has signed in Europe in the last 18 months, following two with wind farm developers in Sweden to power its Hamina data centre in Finland with renewable energy.

Sceptics criticise the move for being little more than a PR exercise, warning that the back-up power required to provide failsafe energy would undoubtedly negate any attempts by Google to reduce its carbon footprint.